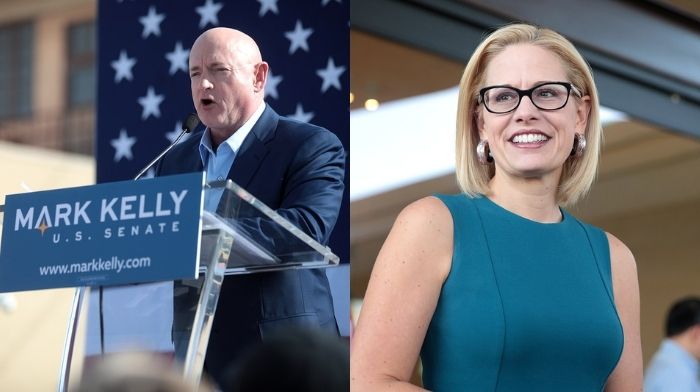 After President Biden’s speech before Congress, Arizona’s two Democrat Senators responded that the President is not doing enough to address the surge of illegal immigrants at the southern U.S. border.

Senators Kyrsten Sinema and Mark Kelly both say that more needs to be done to ease the influx of migrants that surged as Biden took office.

In a statement released on Wednesday, Kelly spoke about the fact that, while Biden did bring up the issue of immigration reform, he did not specifically talk about the situation at the border.

“While I share President Biden’s urgency in fixing our broken immigration system, what I didn’t hear tonight was a plan to address the immediate crisis at the border, and I will continue holding this administration accountable to deliver the resources and staffing necessary for a humane, orderly process as we work to improve border security, support local economies, and fix our immigration system.”

! D Sen. Mark Kelly: “While I share President Biden’s urgency in fixing our broken immigration system, what I didn’t hear tonight was a plan to address the immediate crisis at the border, and I will continue holding this administration accountable”

Kyrsten Sinema’s office issued a statement that was also critical of the Biden administration.

“Sen. Sinema has been clear that she — along with Sen. Kelly — wants to see more action from the administration to address the border crisis and support Arizona border communities. She’s spoken directly with administration officials on this.”

Senators Kyrsten Sinema and Mark Kelly are doing what other Democrats and Joe Biden are refusing to do: Acknowledge the crisis at the southern border. https://t.co/aYgCr2MUjc

Sen. Mark Kelly has already broken with the President by calling the border surge a “crisis,” something the Biden administration has not at all willing to do.

Politico reports that Kelly has asked the White House to send more resources to aid the rising immigration surge.

Both urged Biden to address the border.

Illegal alien border crossings are at a 20-year high. Last month, over 172,000 illegal aliens were apprehended, a 71% increase from February.

Biden doesn’t have control of the border crisis he caused. #BidenBorderCrisis https://t.co/Fif8pJjMuj

RELATED: Report: Warrant Issued For Arrest Of Pastor Who Kicked COVID Police Out Of His Church

It is not only Sens. Kelly and Sinema speaking out over what they can see is a crisis on the border.

After recently going to the border to see the problem himself, along with Sen. Joe Manchin (D-WV), Rep. Henry Cuellar (D-TX) said, “Do we have a humanitarian crisis? Yes, we do.”

Cuellar’s district includes roughly 200 miles of U.S.-Mexico border, and getting a handle on the surge at the border may ultimately be the thing that puts policy over partisanship. Cuellar has also been working closely with Sen. Cornyn and Rep. Michael McCaul (R-TX).

Newly-elected Rep. Tony Gonzalez (R-TX), whose district includes 800 miles of border in west Texas, says that he talks to Cuellar everyday. Gonzaliez says that, “The only way to solve this is not partisan.”

While I respect the Presidency, this is a pure lie. The admin is looking for any reason to explain the crisis they created. We briefed the transition team numerous, numerous times. https://t.co/a5Egf1FYmp via @nbcnews

During his speech on Wednesday, President Biden urged Congress to pass a comprehensive immigration plan that he has proposed, which includes a path to citizenship for roughly 11 million undocumented immigrants, eliminates restrictions on family-based immigration, and expands worker visas.

Watch the incredulous look on Craig Melvin’s face as Biden tries to blame the border crisis on Trump – even he knows Biden is full of “malarkey.” https://t.co/IBjIQsJ5e7