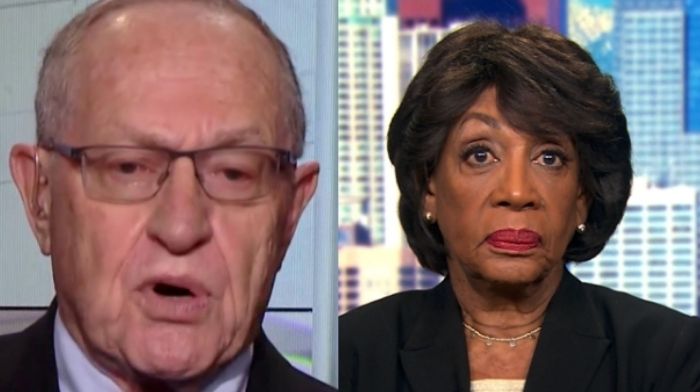 Harvard law professor emeritus Alan Dershowitz went on Newsmax on Tuesday to blast Rep. Maxine Waters (D-CA) for urging protesters in Minneapolis to “get more confrontational” last weekend, saying that she is trying to “influence” and “intimidate” the jury.

He went so far as to say that Waters is taking a page out of the Ku Klux Klan’s playbook to influence court cases by threatening violence.

“First of all, the judge should have granted the motion for a mistrial based on the efforts of Congresswoman Waters to influence the jury,” Dershowitz declared.

“This was an attempt to intimidate the jury,” Dershowitz continued. “It’s borrowed precisely from the Ku Klux Klan of the 1930s and 1920s when the Klan would march outside of courthouses and threatened all kinds of reprisals if the jury ever dared convict a white person or acquit a black person.”

Dershowitz Says Waters Could Cause ‘Mistrial’

“And so, efforts to intimidate a jury should result in a mistrial with the judge, of course, wouldn’t grant a mistrial because then he’d be responsible for the riots that would ensue, even though it was Waters who was responsible,” he said.

Dershowitz went on to predict that Chauvin’s case “will go to the Court of Appeals. And will the Court of Appeals have the courage to reverse this conviction on the ground … that the jury was subjected to intimidation tactics, not only by Waters but by others as well who threatened violence in the event of an acquittal or a lesser charge than murder.”

This piece was written by James Samson on April 21, 2021. It originally appeared in LifeZette and is used by permission.

Read more at LifeZette:
Fox News’ Chris Wallace Asks GOP Sen. Cornyn If Questioning Biden’s Mental Faculties Is Helpful
GOP Rep Cawthorn Calls For Maxine Waters To Be ‘Expelled’ From Congress
Maxine Waters Alleges That She Is ‘Nonviolent’ After She Calls On Protesters To ‘Get More Confrontation’

Trevor Noah Is Wrong about the Police