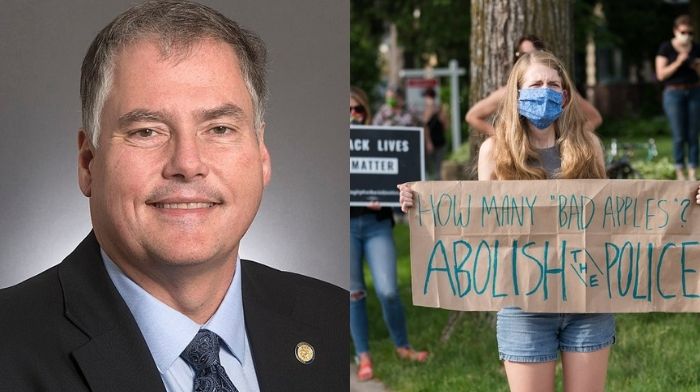 A Minnesota State Senator has introduced legislation that would make anyone convicted of crimes in connection with a protest ineligible to receive government benefits like food stamps, unemployment benefits, and student loans.

Senator David Osmek, a Republican, introduced the bill amid months of riots in and around Minneapolis following the death of George Floyd in 2020, and more recently Daunte Wright last week.

NBC reports that anyone convicted under the law would be unable to receive:

A GOP lawmaker in Minnesota proposed a law to ban people convicted for crimes at protests from aid like food stamps and student loans.

▪️ 35: states considering anti-protester bills since the killing of #GeorgeFloyd
▪️ 10,000: protesters arrested in 1 week after his death pic.twitter.com/GTj8ZDgqq8

The Minnesota bill has almost no chance of passing, given that the Governor is a Democrat, and Democrats control the State Assembly.

But it’s not the first bill introduced by Republicans in the wake of ongoing unrest in different parts of the country.

Florida Governor Ron DeSantis (R) on Monday signed into law what he called “the strongest anti-rioting, pro-law enforcement measure in the country.”

The “Combating Public Disorder” bill, as Gov. DeSantis stated, puts “an end to the bullying and intimidation tactics of the radical left.” The law increases penalties for individuals who commit crimes during a riot situation.

As Gov. DeSantis signed the bill, Polk County Sheriff Grady Judd did not mince words about how Floridians feel about their state, and how they intend to keep it the way it is.

“Pay attention, we got a new law and we’re going to use it if you make us. We’re going to protect the people.” The Sheriff wasn’t done:

“This is what we enjoy in Florida,” he said. “This is the Florida we know and love.”

“Welcome to Florida! But don’t register to vote and vote the stupid way you did up north, you’ll get what they got!”

Polk County, Florida Sheriff Grady Judd to the “millions and millions” of people moving to Florida:

“Welcome to Florida. But don’t register to vote and vote the stupid way you did up north. You’ll get what they got.” pic.twitter.com/jsSaID4LM3

The citizens of other states appear to have had their fill of unlawful protests and riots as well.

According to the International Center For Not-For-Profit-Law, with the addition of Florida, 29 states have enacted some sort of anti-riot legislation.

In Arkansas, it is a Class A misdemeanor to obstruct or interfere with first responders. Oklahoma includes penalties for protesting on private property, in Tennessee, fines are imposed on protesters who block traffic, and in West Virginia, there is no liability for police for deaths while dispersing riots and unlawful assemblies.

Bottom line, protesters might want to familiarize themselves with the law where they plan to protest.

This video will always stick with me, especially when the media had the nerve to call stuff like this peaceful protesting pic.twitter.com/wY4nJVlQSj

Inciting Riots Not Tolerated By Members Of Congress Either

Waters made controversial statements after inserting herself into the trial of former Minneapolis police officer Derek Chauvin for the death of George Floyd.

Waters urged protesters to “get more confrontational” if Chauvin was found not guilty. “We’ve got to make sure that they know that we mean business. We’re looking for a guilty verdict.”

Several Republicans, including House Minority Leader Kevin McCarthy, and four House members from Minnesota, have called for her censure, and even expulsion from the House.

Rep. Marjorie Taylor Greene has filed a resolution to expel Waters from the House.

Democrats have stood by Waters and insisted that she was not inciting or encouraging violence.

Steve Scalise Wants Accountability For Maxine Waters: ‘I Was Shot Because Of This Kind Of Dangerous Rhetoric’ https://t.co/n9npPJYuDg

Chauvin Found Guilty on All Counts in George Floyd Trial