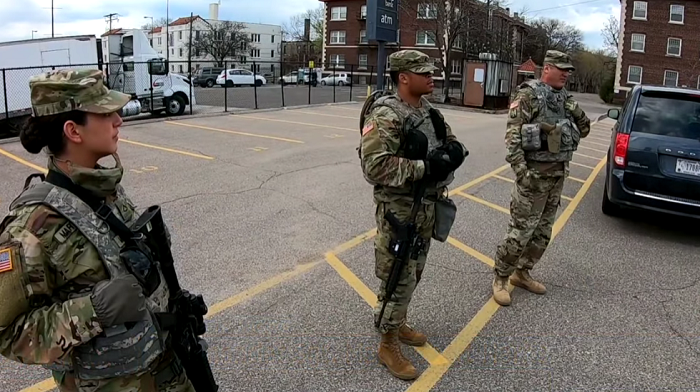 As the nation anxiously awaits a verdict in the Derek Chauvin trial, the city of Minneapolis is gearing up for some tense days and weeks ahead.

Jury deliberations will begin following closing arguments, which are slated for Monday.

“Minneapolis is waking up to images of an occupied city on Monday, as the city and the world await a verdict in the Derek Chauvin trial,” Axios reports.

Axios reveals that residents on Monday morning who were out running everyday errands were encountering “heavily-armed National Guard troops stationed throughout the city.”

The New York Times reports that over 3,000 troops are stationed in the Twin Cities, with more on standby.

With a verdict in the trial of Derek Chauvin set to come as early as next week, more than 3,000 members of National Guard are already working in the Minneapolis area as the city braces for possible protests and civil unrest. https://t.co/nOw6O2geog

The Operation Safety Net website indicates there was a “drive-by shooting” on Sunday directed at members of the National Guard.

Meanwhile, a witness for the defense who testified at the trial that he believed Chauvin was justified in his use of force on George Floyd had his former home vandalized.

Fox News is reporting that Brodd’s home “was vandalized with a pig’s head and blood smears.”

Pressure to expel Maxine Waters for inciting riots: If Pelosi won’t do something, I will, says McCarthy https://t.co/PSx60JAoCl

RELATED: Pelosi Tries To Distance Herself From Rashida Tlaib’s Call To Abolish Policing

Ready For A Crime Spree?

Axios informs their readers that part of the tension involves last week’s “crime spree” which was fueled by protests over the officer-involved shooting of Daunte Wright, a 20-year-old black man who had an open warrant for his arrest related to an aggravated robbery attempt, according to court records.

Over 140 businesses in Minneapolis were damaged.

“Businesses across the city were burglarized, vandalized and looted,” they reported. “Cell phone stores, gas stations, pharmacies, liquor stores and tobacco shops were the most commonly hit.”

We also saw rioting, looting, and arson for months after the incident involving Chauvin first was revealed to the public.

City officials said 140 Minneapolis businesses were hit by a “crime spree” that took place as law enforcement were responding to protests in Brooklyn Center this week. The activity has business owners, already on edge about the trial, even more concerned.https://t.co/4IMC1qKUQl

While Minneapolis resembles an “occupied city” due to concerns of violence, Democrat Rep. Maxine Waters poured gasoline on the fire when she encouraged protesters to “get more confrontational” and “stay in the street” if the jury fails to render a guilty verdict in the Chauvin trial.

WATCH: Rep. Maxine Waters (D-CA) says that BLM protesters should “stay on the street” and get “more confrontational” if Chauvin isn’t found guilty of murder this week pic.twitter.com/bu5NkOcn87

Several lawmakers and media members have called on Waters to be impeached or removed from Congress over her comments.

“We don’t know how long the jury deliberations will take,” Axios writes. “But expect tense days and weeks ahead.”

Trump To Supporters: Don’t Give Money To Karl Rove

Violence in Israel Is the Price of Biden’s Weakness

Today at the Supreme Court: Home Searches and Retroactive Rules