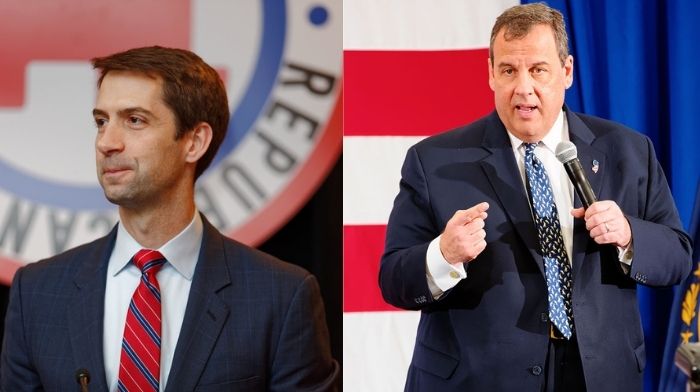 Potential 2024 GOP presidential hopefuls are already beginning the process of shoring up support for a potential run, just six months after the last election. A few potential candidates met with members of the Republican Study Committee (RSC), which is the “conservative” caucus in the Republican House conference.

Sen. Tom Cotton (R-AR), and former New Jersey Governor Chris Christie have already met with the RSC, and more are expected to in the near future.

Cotton discussed the surge of illegal immigration, and Christie urged Republicans to get tough on President Joe Biden.

Christie also blamed former President Donald Trump for the GOP loss of the House and Senate in the 2020 election, according to The Hill.

It was great to be with @RepJimBanks and all of the members of the @RepublicanStudy today for lunch. Great questions and conversation about our country’s future https://t.co/hl4hnyBMRD

The Beginnings Of 2024, Already

The RSC will play host to some already-mentioned names on the list of possibles for 2024.

Former Secretary of State Mike Pompeo will join the RSC this week at a news conference on Iran.

Some Republicans are on the same page with Gov. Christie. They want to keep the popular message and policies of the Trump administration without Trump himself, essentially “Trumpism without Trump.”

Chairman of the RSC Jim Banks (R-IN), said in an interview with NPR that Trump performed well with working class voters, and that its something the GOP must hold onto going forward:

“All of the statistics and polling coming out of the 2020 election show that Donald Trump did better with those voters across the board than any Republican has in my lifetime since Ronald Reagan. And if Republicans want to be successful as a party, win the majority in 2022, win back the White House in 2024, I think we have to learn lessons that Donald Trump taught us and how to appeal to these voters.”

The Hill reports that some members of the RSC, like Jason Smith of Missouri, want Trump to be invited to speak to the group.

The RSC seems to be the place to be seen for would-be 2024 presidential candidates. Many of those would-be’s are waiting to see whether Donald Trump will decide to run.

At least one potential candidate, Nikki Haley, stated should would not run if Trump throws his hat in the ring.

The Republican Party has developed a visible divide between what is seen as the “establishment” wing of the party, made up of members like Rep. Liz Cheney (R-WY) and Senate Minority Leader Mitch McConnell.

But a new breed of Republicans like Reps. Marjorie Taylor Greene (R-GA) and Lauren Boebert (R-CO) who are not afraid to speak out and take more strident stands have come to the forefront, and are popular with Republican voters.

For those considering a run for the White House in 2024, the one thing that should reveal who really has the most influence over the Republican Party, is that none of them who have met with the RSC or have plans to meet, are moving ahead until they know Donald Trump’s plans for 2024.

The Republican Study Committee has become an early vetting stop for potential 2024 GOP presidential candidates, with Cotton, Pompeo, Christie and Haley all courting the group of House conservatives, per @scottwongDC https://t.co/xBGvXplZde