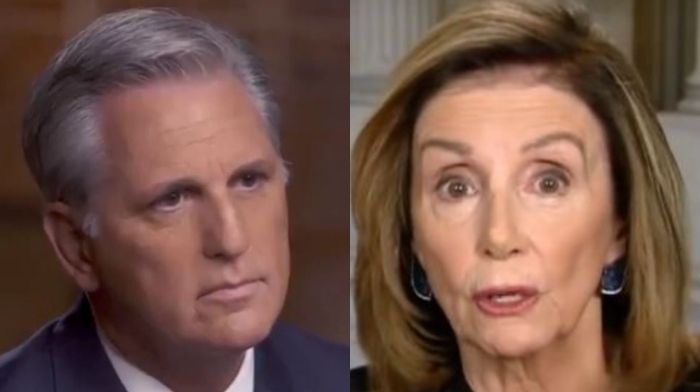 House Minority Leader Kevin McCarthy (R-CA) went on Fox News on Thursday to warn those who are against packing the Supreme Court that they should not relax just because House Speaker Nancy Pelosi (D-CA) claimed that she would not to pursue Democrat proposals to expand the number of justices on the Supreme Court.

During this appearance, McCarthy reminded everyone of comments Pelosi had made on impeachment before using impeachment twice against former President Donald Trump.

“What you find from the Democrats, they don’t want to just defund the police. They want to remove all police officers,” he said. “That’s the new cry. But now, we’re finding what you just played here. They want to dismantle the Supreme Court because they’re trying to dissolve the American way.”

“Think about it, three co-equal branches. They have two branches right now,” McCarthy added. “The only thing that holds them back from their socialist views going forward that are unconstitutional like a D.C. statehood is the Supreme Court that would stand up for the American people.”

“So they want to pack the court to protect their power,” he said. “It’s all about one thing, control. And do not trust Nancy Pelosi when she says she will not move it.”

“Remember, that’s what she said about impeachment before she moved impeachment twice,” McCarthy concluded. “We’ve watched her time and time again to come to what the socialists actually asked for. She surrendered to the socialists many times before, and she will do it again.”

This came hours after McCarthy publicly attacked Democrats for trying to pack the Supreme Court.

“This should scare every single American, regardless of where you stand politically,” McCarthy warned. “The Democrats inside Congress today would rather dismantle this nation than dignify the Constitution. This just goes to show how far the Democratic Party has moved. There almost are no longer common sense or moderate Democrats elected.”

“Even Joe Biden in the past was opposed to this,” he added. “Those Democrats on the Supreme Court were opposed to this because what this simply does is it’s about control.”

“It’s overtaking a branch of government simply to have your control over a nation,” McCarthy said. “It must be the scariest thing I’ve ever heard them do. I never thought they would go this far. But now they’re not only proposing it — they’re moving it in legislation form.”

This piece was written by James Samson on April 16, 2021. It originally appeared in LifeZette and is used by permission.

Read more at LifeZette:
Israel Pulls Off Daring Commando Raid Against Iran
Fox News’ Harris Faulkner Gushes Over Biden For His ‘Iconic’ Empathy – He’s ‘So Present And So Kind’
Trump Celebrates After Sen. Murkowski Indicates She May Not Run Again – ‘Great News’