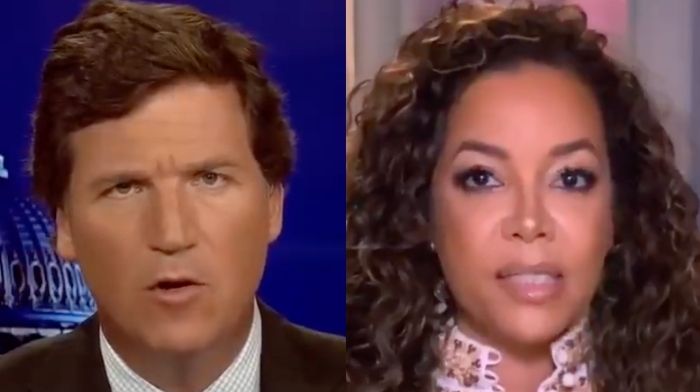 On Wednesday’s episode of the ABC talk show “The View,” cohost Sunny Hostin lashed out at Fox News host Tucker Carlson, going so far as to say that his “irresponsible” remarks on the coronavirus vaccines will cause “people to die.”

Hostin said this in response to comments that Carlson made on his program the night before.

“At some point, no one’s asking this, but everyone should be. What is this about? If vaccines work, why are vaccinated people still banned from living normal lives?” Carlson asked. “Honestly, what’s the answer to that? It doesn’t make any sense at all.”

“If the vaccine is effective, there is no reason for people who have received the vaccine to wear masks or avoid physical contact,” he added. “So maybe it doesn’t work, and they’re simply not telling you that. Well, you’d hate to think that, especially if you’ve gotten two shots, but what’s the other potential explanation? We can’t think of one.”

Related: After Fauci Calls Tucker’s Vaccine Questions A ‘Conspiracy Theory,’ He Asks: ‘What Are You Telling Us?’

This did not sit well with Hostin, who made no secret of that on “The View.”

“I’m disappointed there’s this significant amount of hesitancy,” Hostin said. “I agree with you, Whoopi, the reason people are getting vaccinated and still need to be cautious is because of the growing number of white male Republicans that continue not to want to wear their mask or get vaccinated because they consider it some sort of freedom ride.”

“People need to be more concerned about the virus, more scared of this virus than the vaccine. Everyone knows now that I lost both of my in-laws,” Hostin concluded. “Manny lost both of his parents to this virus, two doctors, healthy doctors. You’ve got to get vaccinated. That’s what’s most important. To protect each other and yourself.”

Hostin’s cohost Whoopi Goldberg was quick to agree with her.

“Listen, you can take that chance,” she said. “You can take a chance given the suggestion from some man you don’t know. You’re watching him on television. Same with us. We’re going to do our best to live.”

RARE CLOTS A SETBACK TO VACCINE ROLLOUT? As America calls for a pause on the Johnson & Johnson COVID-19 vaccine after six people in the U.S. developed a rare blood clot disorder after receiving it, the co-hosts weigh in and discuss its impact. https://t.co/tHlZ3zaE3t pic.twitter.com/oiclqVKtlp

This piece was written by James Samson on April 15, 2021. It originally appeared in LifeZette and is used by permission.

Read more at LifeZette:
Beijing Biden About To Pay Back Chinese Pals With Your Money
Fox News’ Harris Faulkner Gushes Over Biden For His ‘Iconic’ Empathy – He’s ‘So Present And So Kind’
Newt Gingrich Rips Kamala Harris – Says She Was Put In Charge Of Border Crisis ‘Because They Knew She Wouldn’t Do Anything’