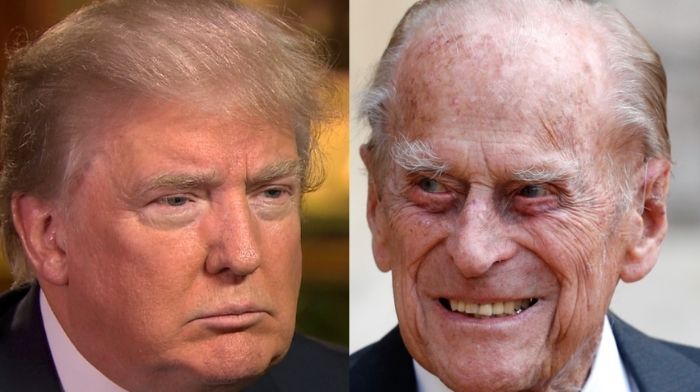 Prince Philip, the 99 year-old husband of Queen Elizabeth, tragically passed away on Friday morning at the age of 99. Now, former President Donald Trump has broken his silence to pay tribute to the legendary royal.

“The world mourns the passing of Prince Philip, a man who embodied the noble soul and proud spirit of the United Kingdom and the Commonwealth,” Trump said, according to The Hill.

“Melania and I send our deepest and most profound condolences to Her Majesty Queen Elizabeth II, and to the entire Royal Family. We send our most heartfelt sympathies to the British people,” he added. “This is an irreplaceable loss for Great Britain, and for all who hold dear our civilization.”

Trump went on to praise Philip as a leader who defined British “dignity and grace” and personified “the quiet reserve, stern fortitude, and unbending integrity” of the country.

Related: Queen Elizabeth Devastated Over ‘Hurtful’ Megxit—Wants It To Be ‘Over And Done With’

“For seven decades, Prince Philip brought the same sense of duty and purpose to his role as consort and husband to the Queen,” the former president continued. “He was admired by his fellow citizens, and respected by everyone around the world. His exceptional example of service, constancy, and patriotism will be his greatest legacy.”

“Over the past few years, Melania and I were honored to have the opportunity to visit the United Kingdom,” Trump said. “We saw firsthand how the Monarchy epitomizes and carries on the virtues of the British People—and no one did so more than Prince Philip.”

“As we grieve his loss, we celebrate his memory and rededicate ourselves to the values to which he devoted his extraordinary life,” the former president concluded. “He will be greatly missed.”

Related: Trump Defends the Queen as Meghan and Harry Leave Royal Family – ‘I Don’t Think This Should Be Happening’

This came hours after Buckingham Palace announced that Philip had passed away.

“It is with deep sorrow that Her Majesty the Queen announces the death of her beloved husband, His Royal Highness the Prince Philip, Duke of Edinburgh,” the pace said in a statement. “His Royal Highness passed away peacefully this morning at Windsor Castle. The royal family join with people around the world in mourning his loss.”

The Queen, 94, will now enter an eight day period of mourning for her husband, who she was married to for 73 years.

This piece was written by James Samson on April 9, 2021. It originally appeared in LifeZette and is used by permission.

Read more at LifeZette:
‘The View’ Goes Off The Rails As Meghan And Whoopi Go At It Over GA Voting Law – Ends With Awkward Silence
MLB Strikes Out On Colorado Move
Ben Carson Rips Ilhan Omar For Comparing Georgia To Apartheid – ‘Disgusting’

Will MLB’s Decision to Move the All-Star Game from Atlanta Hurt Democrats in 2022?