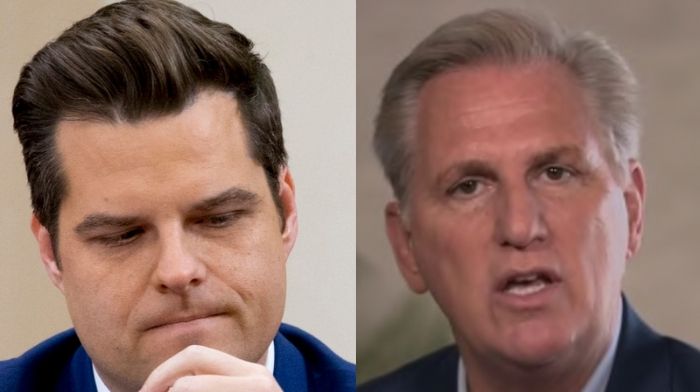 House Minority Leader Kevin McCarthy (R-CA) went on Fox News on Wednesday to address the claims that have been made against Rep. Matt Gaetz (R-FL), who is currently under federal investigation for allegedly having a sexual relationship with a 17-year-old girl and paying her to travel with him.

McCarthy Is Asked About Gaetz

“Breaking news yesterday Leader McCarthy about Congressman Matt Gaetz of Florida, and you’ve been very vocal that Congressman Eric Swalwell should be stripped of his ability to serve on the Intel Committee because of a reported relationship with a Chinese spy,” said Fox News host Dana Perino.

“You say that’s a national security threat on the Intel Committee,” she added. “By that same law, will you take any action to remove Matt Gaetz from the Judiciary Committee while he is under investigation by the DOJ over whether he had a sexual relationship with a 17-year-old and paid for her to travel with him? Something he denies, but that would be a violation of federal sex trafficking laws.”

“Look, I haven’t heard from DOJ and been able to talk to Matt Gaetz yet. I just read the story,” McCarthy replied. “Those are serious implications. If it comes out to be true, yes, we would remove him if that was the case. Right now, Matt Gaetz says it is not true, and we don’t have any information. Let’s get all the information.”

“We did have the FBI come to us and tell us about Eric Swalwell. He was put on the Intel Committee,” he added. “The real challenge there, as you both know Intel Committee is different than any committee in Congress. You get all the secrets.”

Related: Kevin McCarthy On Biden’s Border Situation – ‘More Than Just A Crisis — This Is A Human Tragedy’

“Let me also ask you do you have any idea why Congressman Gaetz was the only Republican to vote against the federal government in terms of the trafficking money, the funds?” Perino pressed.

“No, I have no idea whatsoever why he would vote against that,” McCarthy responded.

“Have you spoken to him since the news broke last night?” said host Bill Hemmer, to which McCarthy replied, “I haven’t been able to talk to Matt Gaetz yet.”

“Hopefully, I’ll talk to him today,” he concluded. “I’ve been traveling. We’re going to a vaccination facility shortly. Later this afternoon, I hope to be able to speak with Mr. Gaetz.”

This piece was written by James Samson on March 31, 2021. It originally appeared in LifeZette and is used by permission.