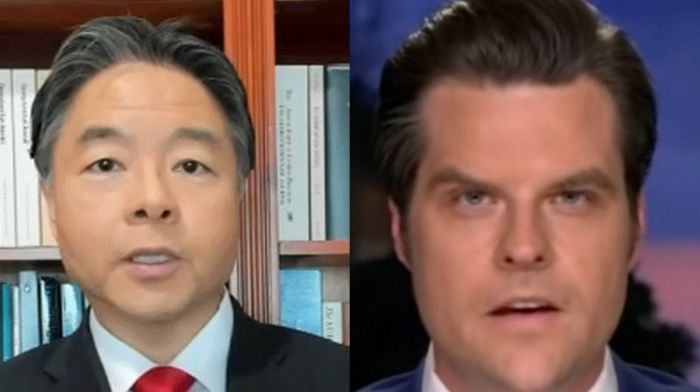 Representative Ted Lieu (D-CA) went on MSNBC on Tuesday to demand that Rep. Matt Gaetz (R-FL) be removed from the House Judiciary Committee after the Republican was targeted by a federal investigation into a sexual relationship with a 17-year-old, who he has been accused of paying to travel with him.

Lieu was asked about an interview that Gaetz did with Fox News host Tucker Carlson in which he defended himself.

“During this entire bizarre interview, congressman Matt Gaetz does not deny a federal investigation against him that is looking at whether or not he had sexual relations with a 17-year-old girl and that she traveled across state lines and was induced by him to do so with payments or hotel stays and so on,” Lieu said, according to The Hill.

“That by itself is a very serious charge. If it’s true, if he, in fact, had sexual relations with an underage minor, I know that Florida law also makes it a felony to do so,” he added. “So Matt Gaetz is facing very serious charges right now, and his defense is bizarre, and it doesn’t shield him from these investigations. ”

“The fact that someone, even if it’s true, in March tried to extort him or his family to allegedly make this case go away, doesn’t change the fact that there is a case,” Lieu continued. “There is a very serious federal investigation opened under the Trump administration.”

Related: McCarthy Addresses Allegations Against Gaetz – ‘We Would Remove Him From Judiciary Committee’ If They’re True

“I’m a former prosecutor,” he said. “They don’t just do this out of nothing. There has to be a factual predicate, and the Department of Justice is going to be a whole team of federal investigators investigating Matt Gaetz. He’s in deep trouble, and that’s why he needs to be removed from the House Judiciary Committee.”

This piece was written by James Samson on March 31, 2021. It originally appeared in LifeZette and is used by permission.

Here Are The Details On Biden’s $2 Trillion Infrastructure Plan