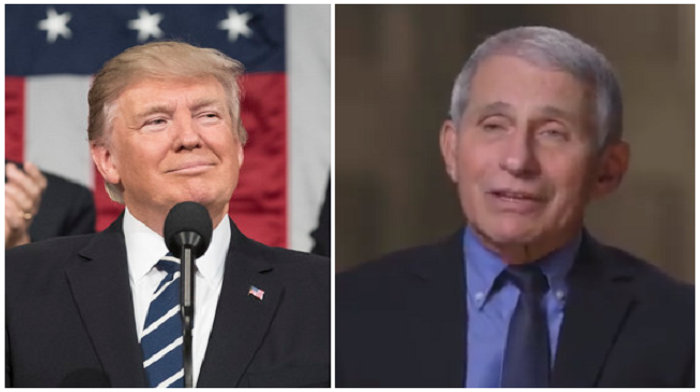 “Based on their interviews, I felt it was time to speak up about Dr. Fauci and Dr. Birx, two self-promoters trying to reinvent history to cover for their bad instincts and faulty recommendations, which I fortunately almost always overturned,” he said.

Trump’s ire was raised by interviews the medical experts conducted with CNN – one in which Birx suggested the previous administration could have done more to prevent COVID deaths, and one in which Fauci took credit for the development of the vaccine.

“I look at it this way — the first time, we have an excuse. There were about 100,000 deaths that came from that original surge,” Birx said. “All of the rest of them, in my mind, could have been mitigated or decreased substantially.”

Fauci, meanwhile, claimed that after watching New York’s medical system being overrun, “it became very clear that the decision we made on January 10 to go all-out and develop a vaccine, may have been the best decision that I’ve ever made with regard to intervention as the director of the institute.”

Fauci credits himself, not Trump, for the rapid rollout of Covid vaccines: “It may have been the best decision that I’ve ever made” pic.twitter.com/CYrni6KeKA

Trump Unloads On Fauci And Birx

A statement from the office of the former President was released Monday evening in which he accused Fauci and Birx of having “bad policy decisions” on the economy and suggested the pair would have left the country “years away from an approved vaccine” and “putting millions of lives at risk.”

Trump blasted Birx as “a proven liar with very little credibility left” and described Fauci as “the king of ‘flip-flops’ and moving the goalposts to make himself look as good as possible.”

Trump even took a jab at Fauci’s inability to throw a baseball.

But it was the vaccine with which he took most issue, reiterating his role in helping to develop it through Operation Warp Speed in a historically rapid effort.

“We developed American vaccines by an American President in record time, nine months, which is saving the entire world,” Trump’s statement reads.

“Dr. Fauci and Dr. Birx moved far too slowly, and if it were up to them we’d currently be locked in our basements as our country suffered through a financial depression,” he added.

Trump should’ve told us about Fauci and Birx in those exact terms while he was still in the White House. We all knew.

RELATED: Rand Paul Questions Whether Mask Mandates Were Even Effective As He Calls Out Fauci

Fauci’s Past Statements Contradict His Claims?

In an interview with NewsNation shortly after the election, Fauci praised Operation Warp Speed and gave “considerable credit” to the administration for the vaccine’s development, without mentioning the President specifically.

“I think they get considerable credit. I think you have to call it the way it is,” Fauci said.

Trump rant against Fauci and Birx on the one-year anniversary of Trump extending the shutdown, based on their advice, for another 30 days. They were incompetent frauds then and are dangerous to this day.

Over the summer, he sang the praises of Cuomo saying he “did it correctly” in handling the pandemic, despite early evidence showing the Democrat had issued an executive order that forced nursing homes to take on COVID-positive seniors, killing them by the thousands.

Dr. Fauci: “We have got to do the things… that we need to do to turn this around… When you do it properly, you bring down those cases… We have done it in New York. New York got hit worse than any place in the world. And they did it correctly…”https://t.co/AyhXRvnFDd pic.twitter.com/0NuHmJdt3m

Trump also defended his decision to keep the doctors on board.

“I only kept Dr. Fauci and Dr. Birx on because they worked for the U.S. government for so long — they are like a bad habit!” Trump insisted.