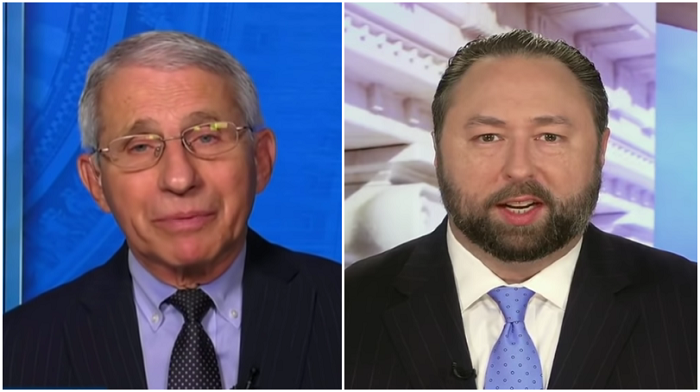 Jason Miller, a senior adviser to former President Trump, slammed Dr. Anthony Fauci after the chief medical adviser to Joe Biden took credit for the development of the COVID-19 vaccine.

“If it were up to Fauci we still wouldn’t have a Covid vaccine,” Miller fired back on social media.

In an interview with CNN, Fauci boasted that pushing the development of the COVID vaccine “may have been the best decision that I’ve ever made.”

“When I saw what happened in New York City, almost overrunning of our health care systems, and that’s when it became very clear that the decision we made on January 10 to go all-out and develop a vaccine, may have been the best decision that I’ve ever made with regard to intervention as the director of the institute,” he said.

If it were up to Fauci we still wouldn’t have a Covid vaccine. https://t.co/YlPjOkSxHU

Earlier this month, Donald Trump issued a statement taking credit for the development of the vaccine.

“I hope everyone remembers!”

Fauci, it would seem, now disagrees over the role the former President and Operation Warp Speed played in pushing the vaccine’s successful development.

Fauci credits himself, not Trump, for the rapid rollout of Covid vaccines: “It may have been the best decision that I’ve ever made” pic.twitter.com/CYrni6KeKA

RELATED: Rand Paul Questions Whether Mask Mandates Were Even Effective As He Calls Out Fauci

Fauci Is Contradicting His Own Previous Statements

Having made the comments on CNN, there was little to no pushback on Fauci’s eyebrow-raising claims of credit for the COVID vaccine.

That said, they are contradictory to previous comments he’s made in the past.

In an interview with NewsNation shortly after the election, Fauci praised Operation Warp Speed and said the Trump administration gets “considerable credit” for the vaccine’s development.

“I think they get considerable credit. I think you have to call it the way it is,” Fauci said. “This was something that was put together, you know a combination of leadership from the Department of Health and Human Services, and the Department of Defense.”

He added, “Definitely, they should get credit for that.”

Earlier this month, Senator Rand Paul (R-KY) eviscerated Dr. Fauci for continuing to wear a mask even after having been vaccinated.

Fauci insisted that wearing a mask despite being vaccinated is not ‘theater.’

“Here we go again with the theater, let’s get down to the facts,” Fauci fired back, noting variants of the original COVID strain are a reason for continuing to wear a mask.

Fauci also recently suggested kids shouldn’t be allowed to play with each other without masks.

Paul responded by explaining COVID is less deadly than seasonal influenza for kids and mockingly asked “will Lord Fauci next conclude that kids should wear masks until the seasonal flu is eradicated?”

Lord Fauci wants all of the glory, all of the credit, but can’t acknowledge his mistakes.