Lindsey Graham Rips AOC On Border Crisis: ‘Where Is AOC? Why Aren’t You At The Border?’ 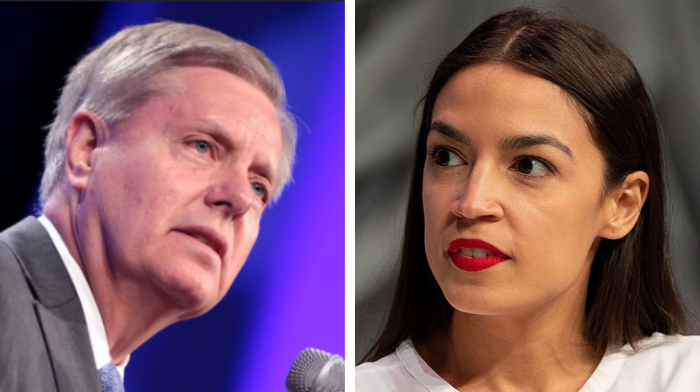 During a Wednesday press conference, Republican Sen. Lindsey Graham lit into far-left Democratic New York Congresswoman Alexandria Ocasio-Cortez for not going to the border during the crisis as she had when Donald Trump was president.

Graham criticized “open border” Democrats for not traveling to the border to have a closer look at what is being reported.

During Trump’s presidency, Ocasio-Cortez said that detained people told her that Border Patrol officers told them to “drinking out of toilets” and complained about “officers laughing.”

Sen. Lindsey Graham: “Where is AOC? Why aren’t you at the border looking at the things being reported?” pic.twitter.com/cSeUJ3VlOK

Graham said, “Where is AOC? Why aren’t you at the border looking at the things being reported? If you were worried about children under Trump being in bad conditions, this is worse.”

Ocasio-Cortez has remained relatively quiet on the current border crisis unfolding under Biden.

The Democrat has not been silent, however. On February 23rd she said, “This is not okay, never has been okay, never will be okay – no matter the administration or party.”

This is not okay, never has been okay, never will be okay – no matter the administration or party. https://t.co/AEV7s7QQnB

When Ocasio-Cortez visited the southern border in July 2019, she reportedly screamed at federal law enforcement officers and said women were forced to drink toilet water.

Graham said on Wednesday, “Most Republicans want to make sure we deal fairly with those who have been here a long time but we address the underlying problems of illegal immigration … that’s not an unreasonable request.”

“There used to be Democrats that understood to get legalization on the table you had to address the underlying causes of illegal immigration .. those voices have been silenced,” Graham said.

He added, “The open-borders crowd is now firmly in control of immigration.”

Graham then said of the crisis, “If you’re worried about people having COVID outbreaks, this is the biggest COVID spreader in the entire country…so where are you?”

BORDER CRISIS: It’s out of control, but Nancy Pelosi says just the opposite! As DHS Secretary Mayorkas FINALLY visits the border for the first time, @RepMattGaetz and Tom Homan weigh in, tonight on “Hannity”. https://t.co/2PFvpPYtD1

Harris’ efforts will focus on the border situation and Central America.

“When she speaks, she speaks for me,” Biden said. “Doesn’t have to check with me. She knows what she’s doing and I hope we can move this along.”