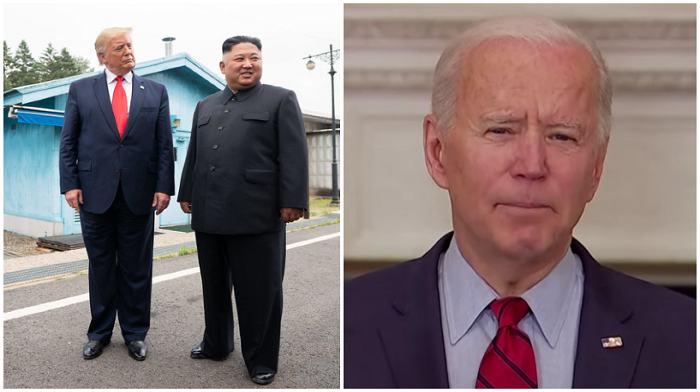 North Korea reportedly fired two ballistic missiles into the Sea of Japan Thursday, a little more than a week after the sister of leader Kim Jong Un warned the Biden administration about being able to “sleep in peace.”

Japan’s Defense Ministry confirmed that two short-range ballistic missiles were launched from North Korea and flew about 155 miles before falling into waters off the rogue nation’s east coast.

Japanese Prime Minister Yoshihide Suga called the ballistic missile test a “threat to the peace and security” to his nation and announced Japan “lodges its serious protest and strongly condemns.”

North Korea has launched two suspected ballistic missiles into the sea off its eastern coast. The launch was confirmed by South Korea, Japan and the US.

“If it [America] wants to sleep in peace for (the) coming four years, it had better refrain from causing a stink at its first step,” Jong said.

Kim Yo Jong, the sister of North Korea’s leader, warned the Biden administration against “causing a stink at its first step” on Monday, hours after the White House said it had not received a response to its outreach to Pyongyang. https://t.co/8u1lEzVdJZ

The latest missile test is the second such effort by North Korea since Yo Jong’s comments, and the second in less than a week.

President Biden dismissed the launch as “business as usual.”

Clearly, North Korea took umbrage with being shrugged off and upped their game by conducting a test banned by the U.N. Security Council. Are they sending Biden a message?

“Our force remains ready to ‘fight tonight,’ and we continue to make progress toward the eventual transition of wartime Operational Control to a [Republic of Korea]-commanded, future Combined Forces Command,” Austin said.

“While meeting all the conditions for this transition will take more time, I’m confident that this process will strengthen our alliance,” he added.

The U.S. remains committed to the defense of the ROK using the full range of U.S. capabilities. As the U.S. and ROK continue to maintain a robust combined defense posture, we also remain committed to the denuclearization of the Korean Peninsula. pic.twitter.com/QhdHggiC4r

The Daily Mail observes that relations between North Korea and the United States have soured of late.

“Relations between the U.S. and North Korea, once hailed as potentially promising after President Donald Trump’s three meetings with Kim, have been tense with no substantive contact for more than a year,” they write.

Even the Washington Post admits one “benefit of Trump’s summit diplomacy” with Kim Jong Un was “that the regime has refrained from detonating a nuclear device or launching a long-range missile since” they met in Singapore in 2018.

It is clear tensions are on the rise once again.

Lindsey Graham Rips AOC On Border Crisis: ‘Where Is AOC? Why Aren’t You At The Border?’