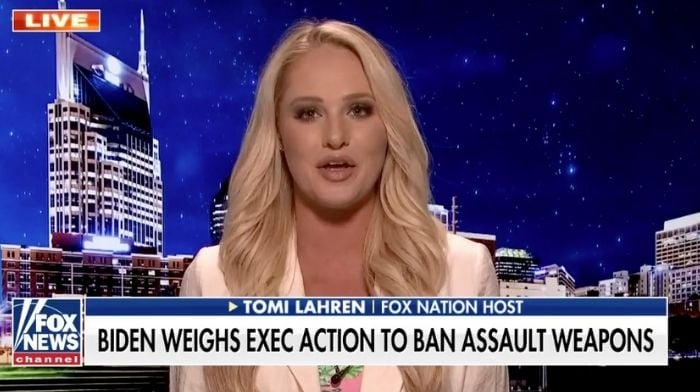 President Joe Biden wasted no time in the wake of the tragedy, calling for bans on “assault weapons” and “high capacity” magazines.

“I don’t need to wait another minute, let alone an hour, to take common sense steps, that will save lives in the future, and to urge my colleagues to act. We can ban assault weapons and high capacity magazines in this country,” Biden said.

Lahren opened up her commentary by questioning what an “assault weapon” is, and whether Democrats could define one.

She also ripped into the common mistake made by supporters of gun control that “AR” in AR-15 stands for “assault rifle.” The letters AR refer to ArmaLite Inc., the firearm’s original manufacturer.

2.5 seconds- how long it took the anti-gunners to jump on the #WDBJ shooting. #TeamTomi #2A #gunsense #WDBJshooting pic.twitter.com/TgnS2xLVxo

Never one to sugarcoat the issues, Tomi laid out her thesis gun control advocates: criminals tend not to follow gun laws.

And she has the facts to back that up. A 2019 survey conducted by the Department of Justice (DOJ) found that some 43 percent of criminals had bought their firearms on the black market, 6 percent acquired them via theft, and 10 percent made a retail purchase – 0.8 percent purchased a weapon from a gun show.

Lahren drew the conclusion that, “The only people your gun control is going to stop and infringe upon is law-abiding citizens and Americans who use their Second Amendment rights to defend and protect themselves.”

Lahren reminded Fox & Friends viewers that throughout the summer of 2020, when Americans witnessed much civil unrest in a large portion of America, prominent Democrats called for defunding the police.

“Now they are effectively saying that the only people who need to have high capacity weapons, or have weapons of any sort whatsoever, that consist of a firearm, are the police,” Lahren noted.

Lahren added that she and other conservative commentators tried to tell people that if Joe Biden and the Democrats were elected, they push gun control, concluding, “Well, here we are. Democrats never let a tragedy go to waste.”

Strong words from a commentator not known to pull any punches.

SHALL NOT BE INFRINGED

Tomi Talks About The Border Crisis

Tomi also weighed in on the chaos at the U.S. southern border. She said what a lot of Americans are no doubt thinking as they watch the events at the border unfold: “That entire administration seems to be completely unprepared for what’s going on at the border.”

She added that she believes that, “It is part of the plan. They know exactly what is happening at the border.”

She pointed out how the media has not been allowed to view conditions in detention centers or talk to Border Patrol agents.

Lahren also said she would be going to the border next week to talk to ranchers and landowners “who have had to declare a state of emergency because of the influx coming into their communities.”

“We are putting illegal immigrants in conventions centers that we are told are not safe to hold concerts and events, but they’re safe enough to hold thousands and thousands of people who have no legal right to be here.”

Democrats will never let a tragedy go to waste. You know what strict gun control measures do and who they apply to and effectively neuter? LAW-ABIDING citizens. I’ll discuss on @FoxFriendsFirst in 5 mins!

“Americans, wake up, once again, we told you so. Open borders, gun grab, higher taxes, higher gas prices, this is what you get when you vote Democrat,” Lahren said, signing off.

Watch the latest video at foxnews.com

Audit the Fed? We Just Did