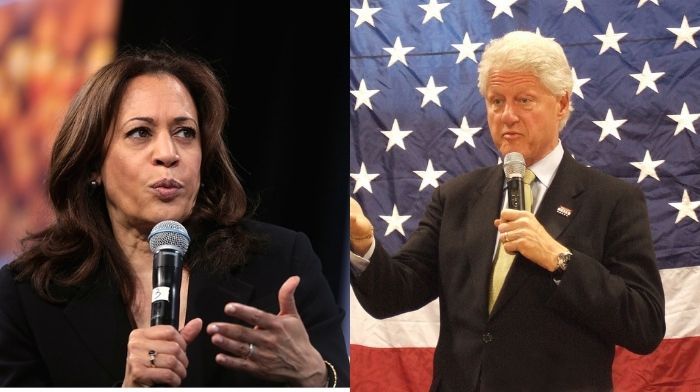 On Friday, Vice President Kamala Harris will hold a discussion about “empowering women and girls in the U.S. and around the world” with… wait for it… former President Bill Clinton.

The event will be hosted by Harris’ Alma Mater, Howard University, and the Clinton Global Initiative.

In a curious turn of events, speakers not invited to attend the event include, Paula Jones, Juanita Broaddrick, and Monica Lewinsky.

In their announcement of the virtual event, The Clinton Foundation billed this darkly ironic event as “A one-on-one conversation with President Clinton and Vice President Kamala Harris on the impact of the COVID-19 pandemic on women, and empowering women and girls in the U.S. and around the world.”

Just an observation and my opinion, but ‘virtually’ might be the safest place for “women and girls around the world” for a shindig like this.

Irony Is Lost On Liberals, Democrats

As a woman, it is hard to know where to begin on this one. Powerful men and their peccadillos have been the unspoken elephant in the room since time began.

President John Kennedy’s marital extra curricular activities were common knowledge, even to his wife. It was a different time then.

Whether you were a woman who had a husband with a roving eye or not, the general attitude was, “boys will be boys,” and you looked the other way.

But times have changed. Attitudes about men who get handsy with women who are not their significant others have definitely changed. The days of women putting up with guys like actor Dabney Coleman’s sexist pig boss character in the movie “9 to 5” are over.

But there will also always be men like Bill Clinton who just don’t get it.

In a minuscule amount of fairness to Bill Clinton, as a politician, he was brilliant. You might have disagreed with every word that came out of his mouth, but you had to admit, he was good. Really good.

But that’s where it ends. And now, a Democrat Vice President, a woman, sees nothing wrong with a man with a track record with women like Bill Clinton, co-hosting her discussion about empowering women and girls.

Paula Jones accused then Governor of Arkansas Bill Clinton of sexual harassment. Monica Lewinsky was a 22-year old White House Intern who had an affair with President Bill Clinton in the Oval Office.

And in 1978, Juanita Broaddrick was a Nursing Home Administrator and volunteer on Clinton’s first gubernatorial campaign when she claims that Bill Clinton raped her.

To be sure, Clinton has never faced criminal sanction for any of the incidents.

Inviting Bill Clinton to speak on Empowering women…. is like asking Jeffrey Dahmer to host a cooking class.

As a conservative woman, I see a pattern. Not just a pattern of women accusing powerful men of sexual assault, but the pattern of the ones with a “D” after their name getting a pass.

Bill Clinton has never been convicted of anything, and he is an elder statesman of the Democrat Party. This doesn’t seem to be a problem in the #metoo era?

Currently, Kamala Harris has other double standard problems. New York Governor Andrew Cuomo has been accused by at least seven women of sexual harassment and/or misconduct.

Many elected Democrats have called on Cuomo to resign. Even President Biden has said that if the allegations are true then he should step down. There is one voice missing, that of Vice President Harris.

However, in 2018, during the confirmation hearings for Justice Brett Kavanaugh, then Senator Harris’ voice was among the loudest in the choir of ‘believe all women.’

Of Christine Blasey Ford, who accused Kavanaugh of sexual harassment, Harris had this to say, “There are “many cases where there was enough evidence to believe something happened but not necessarily prove it beyond a reasonable doubt in a courtroom, but it doesn’t mean it didn’t happen. I believe her.”

Harris went on to add, “Let’s speak the truth, that it was a denial of justice for the women of this country, and sexual assault survivors. Men and women. In this country, let’s speak that truth.” The difference with Kavanaugh appears to be that he is a conservative judge.

Vice President Harris’ “discussion” of “empowerment of women and girls” will not doubt go off without a hitch. Everyone will gush about how enlightened it was, and Bill Clinton will bite his lip (at least he’s not biting Juanita’s lip) and tell everyone how much he cares.

In 2018, The Political Insider interviewed Juanita Broaddrick to get her story.