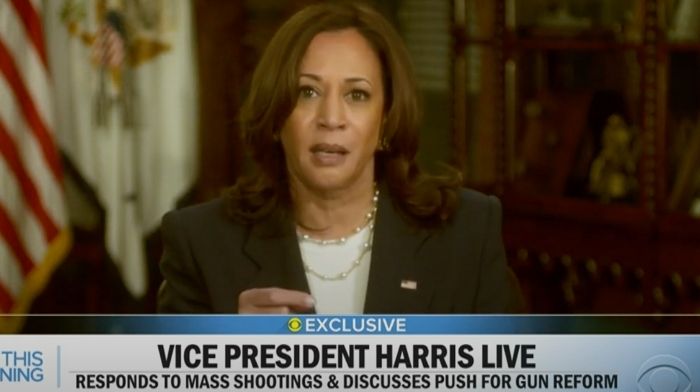 Vice President Kamala Harris went on “CBS This Morning” on Wednesday to shamelessly try and use the recent mass shootings in Atlanta and Boulder to fuel her own gun-grabbing agenda.

‘It Is Time For Congress To Act’

“It is time for Congress to act and stop with the false choices,” Harris said. “This is not about getting rid of the Second Amendment. It’s simply about saying we need reasonable gun safety laws. There is no reason why we have assault weapons on the streets of a civil society. They are weapons of war. They are designed to kill a lot of people quickly.”

“Let us all agree that we need background checks,” she added. “But the point here is Congress needs to act. And on the House side, they did. There are two bills which the president is prepared to sign, and so we need the Senate to act.”

“And this is going to be about your viewers and all of us pleading to the reason, pleading to the hearts and minds of the people in the United States Senate to say enough with the partisanship, enough with the ideological perspective on this,” Harris continued. “Let’s just be practical and agree. People who will have been found to be a danger to themselves and others should not be able to purchase a gun.”

Harris was then asked about the possibility of President Joe Biden using executive orders to bring about gun control.

“We should first expect the United States Congress to act,” she replied. “I’m not willing to give up on what we must do to appeal to the hearts and minds and the reason of the members of the United States Senate. I served in that body.”

“I believe it has to be possible that people agree these slaughters have to stop,” Harris said. “Again, reject the false choices, and stop pushing it for sure. Stop pushing the false choice that this means everybody’s trying to come after your guns. That is not what we’re talking about.”