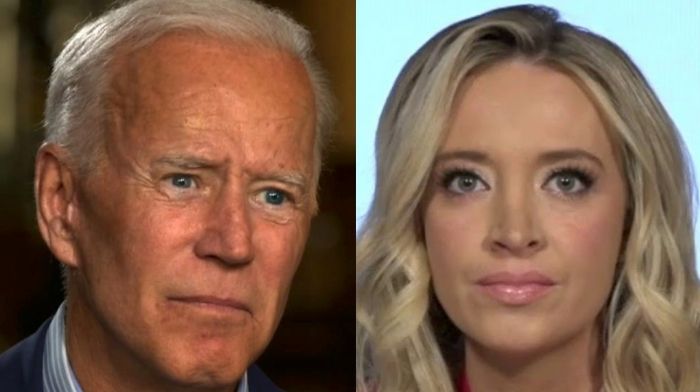 Joe Biden is set to hold his first former press conference as president on Thursday, and former White House Press Secretary Kayleigh McEnany is speaking out to demand that he be asked the “hard questions” about the crisis at the border, which many say that he created.

While appearing on Sean Hannity’s Fox News show, McEnany said it is crucial that Biden be grilled about the border crisis during this press conference.

“It’s incredible what the Biden White House is able to get away with,” McEnany said. “The press needs to ask these really hard questions of him, and I’m not just saying, you know, ‘What are your thoughts on the border? That’s not a sufficient checking-of-the-box question.”

“They need to ask him, ‘You say you blame this on Trump. Explain to me specifically how this is Trump’s fault when, in fact, numbers came down when he took historic immigration action in 2019. And [now] they’ve gone up and they’re wearing Biden t-shirts, flying Biden flags and, on camera, citing that they’re coming here because of you,’” she added.

“He needs to be confronted that directly and that specifically,” McEnany concluded.

Related: Kayleigh McEnany Reveals She ‘Warned The Reporters’ That Biden Would Rarely Talk To The Press

This comes after McEnany said it was “confounding” that the Biden administration announced his first press conference nine days in advance.

“It’s extraordinary that he hasn’t taken questions so far. It’s also confounding to me — as Dana Perino, one of my predecessors, pointed out — that they chose to announce it nine days in advance!” McEnany said.

“A lot can happen then and one of the advantages is, you gauge the messaging. He [Trump] said it was the rule. He didn’t announce the press conference till the morning of,” she continued.

“No one knows what will happen and to put this pressure on it and have this buildup where we will all be watching this, it’s an extraordinary way to go about things,” McEnany concluded. “A confounding strategy and I’m not sure why they chose to deal with it.”

Read more at LifeZette:
FOX 10 Phoenix Anchor’s Integrity Shines as She Resigns in Objection to Bias Reporting and Half-Truths
Toobin Beats All Comers In Liberal Hack
Chelsea Handler Says That ‘Everyone Has To Give A Little Bit Away Who Has Too Much’