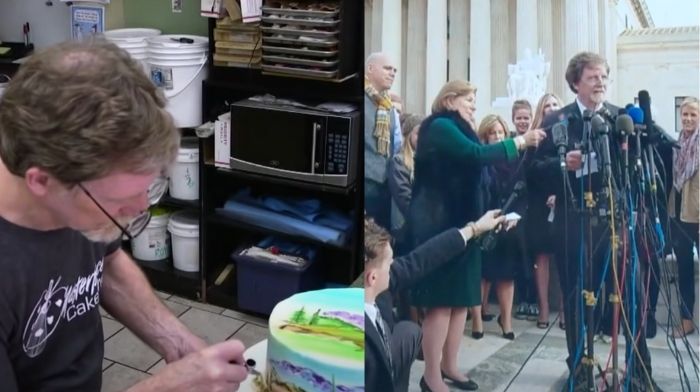 Jack Phillips, the Colorado bakery owner who was previously sued because he refused to bake a wedding cake for a same-sex couple in 2012, is now battling another lawsuit. This time, in relation to a birthday cake for a transgender woman.

Phillips, who won a partial victory at the Supreme Court in the same-sex wedding court case, is now back in court after a lawsuit filed by Autumn Scardina, who says that Phillips refused to bake a birthday cake that also celebrated her transition from male to female.

The right to hold views that others don’t share is a quintessential American liberty. The right not to be prosecuted for expressing those views is another. The First Amendment protects Jack Phillips, not the haters who are persecuting him.https://t.co/82OnCkGMsy

RELATED: Kamala Harris Laughs Hysterically When Asked If She Is Going To Visit The Border

According to CBS4 Denver, Autumn Scardina made the order for the cake on the anniversary of the Supreme Court ruling in 2017 because she “wanted to find out if he really meant it.”

During the virtual trial conducted by a state judge in Denver, Scardina’s attorney asked if the call was a “set up.” Scardina answered that it was not. “It was more of calling someone’s bluff”, she stated.

Autumn Scardina, herself an attorney and activist, has spent a lot of time filing complaints against Jack Phillips and Masterpiece Cakeshop. She had previously filed a complaint with the Colorado Civil Rights Commission.

Phillips countersued in that case, but settled with the Commission in March of 2020. Scardina then filed another lawsuit in June of 2020, alleging that Masterpiece Cakeshop violated Colorado’s Anti-Discrimination Act and the Colorado Consumer Protection Act.

Kristen Waggoner, senior vice president of Alliance Defending Freedom, who represented Phillips in his Supreme Court case, said Phillips is being targeted “because he won’t create custom cakes that express messages or celebrate events in conflict with his conscience.”

Phillip’s attorney, Jake Warner said, “This attorney’s relentless pursuit of Jack was an obvious attempt to punish him for his views, banish him from the marketplace and financially ruin him and his shop.”

woke mob targeting jack phillips again. understand the lengths the opposition is willing to go to in order to crush dissent. pic.twitter.com/qPU90Rmhik

RELATED: Rasmussen Poll Shows Biden Approval Down – Is The Honeymoon Over?

How It All Started

Life changed for Jack Phillips the day that Charlie Craig and David Mullins walked into Phillip’s Masterpiece Cakeshop in July 2012.

The gay couple was planning to celebrate their wedding, and came to Phillip’s shop to purchase a wedding cake.

Phillips, who is a Christian, refused to design and bake the cake, saying that gay marriage violated his religious beliefs. He offered to sell them an already prepared cake.

The case reached the U.S. Supreme Court, which ruled that the Colorado Civil Rights Commission had “expressed impermissable hostility to religion and thus violated the free exercise clause of the First Amendment,” but didn’t rule on the larger constitutional question of whether or not a private company can be forced to perform a service to abide by anti-discrimination laws.

The guy already won at SCOTUS. How many times are they going to abuse the legal system to target him? “LGBT Activists Haul Jack Phillips Into Court Again Over Trans Cake” https://t.co/Z4bE3uL61i

Jack Phillips and his cake shop are not the first be forced to defend their faith to those who might not agree with it.

Fast-food chain Chick-fil-A has come under fire for the opposition of CEO Dan Cathey to gay marriage. In 2019, Chick-fil-A caved to activists and announced that they would stop funding two Christian charities who also have histories of opposing gay marriage.

Jack Phillip’s attorney Jake Warner may have summed up how many of these businesses feel.

During a court appearance in the Scardina case, Warner addressed the judge, “At some point, your honor, this must stop. Mr. Phillips just wants to get back to his life and make cakes.”

Colorado baker Jack Phillips is being sued by progressives. Also known as “Tuesday”.

DeSantis Only Regrets ‘That We Ever Locked Down For Even One Day,’ Matt Gaetz Says