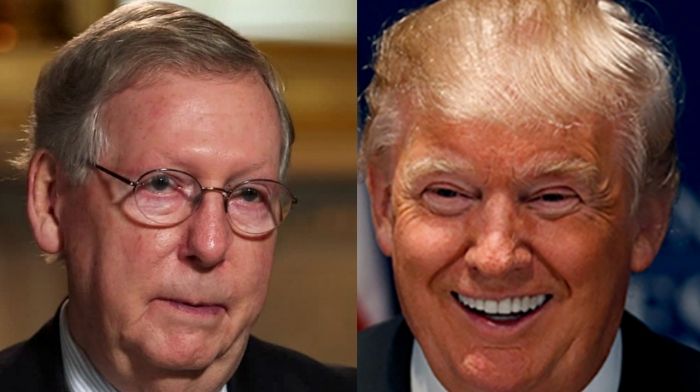 Trump Goes Off On Mitch McConnell

“I think we need better leadership than Mitch McConnell and stronger leadership,” Trump said in a podcast interview with Fox News’ Lisa Boothe. “I mean he can’t reign in his own people.”

When asked if he had spoken with McConnell lately, Trump replied, “Not really, I don’t really want to talk to him.”

Trump also said that he feels McConnell is in danger, given the fact that Democrats were preparing to end the filibuster rule requiring 60 votes in the Senate to move forward on legislation.

“He’s hanging by a thread right now with respect to the filibuster,” Trump warned of the Senate minority leader. The former president also said that he believes that Democrats like Sen. Joe Manchin (WV) will eventually side with those who are trying to end the filibuster, despite vocally promising to defend it.

“Joe talks but he always ends up going with the Democrats,” Trump said, before adding of the filibuster, “If they knock it out, it will be catastrophic for the Republican party.”

Related: Trump Pledges That He Will Campaign Against Lisa Murkowski In 2022

Not stopping there, Trump revealed that during his time in the White House, he had urged McConnell to end the filibuster by warning that Democrats will do the same thing if they ever got control of Congress.

“If they’re going to knock it out maybe we should and get everything that we want,” Trump recalled telling McConnell, who allegedly responded by saying that Democrats will never end the filibuster rule.

“He said, ‘They’ll never knock it out; it’ll never happen. They’ll never do it; they don’t want to do it,’” said Trump, who also claimed that McConnell has since admitted that he was right.

Trump said that he will be very active in the 2022 midterm elections, as he believes Democrats are destroying our country in many ways.

“We got to fight like hell, these are very bad people in many cases,” Trump said, adding that he is optimistic about the future of the Republican Party, all thing’s considered.

This piece was written by James Samson on March 22, 2021. It originally appeared in LifeZette and is used by permission.

Read more at LifeZette:
Biden Accuser Tara Reade Slams Him And Democrats For Reaction To Cuomo Claims
Gretchen Whitmer Gets Bad News As Michigan House Makes Moves To Subpoena Her Former Health Director
Chelsea Handler Says That ‘Everyone Has To Give A Little Bit Away Who Has Too Much’

Derek Chauvin’s Trial in Floyd Death Is on Track

How To Use Clubhouse