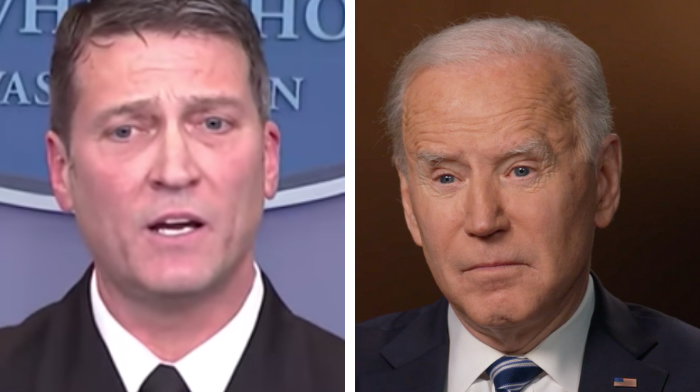 On Sunday, a former White House physician to ex-Presidents Barack Obama and Donald Trump suggested there was something peculiar about President Joe Biden stumbling on the steps of Air Force One on Friday.

I served as White House physician under THREE Presidents. I’ve seen what it takes physically AND mentally to do the job. I can tell you right now that the way Biden is hiding from the public is a MAJOR red flag. Something’s not right!

“I’ve seen what it takes physically AND mentally to do the job,” he continued. “I can tell you right now that the way Biden is hiding from the public is a MAJOR red flag.”

RELATED: Illegal Immigrant Admits That If Trump Was Still President He Would ‘Definitely Not’ Have Crossed The Border

In 2006, Jackson joined the White House Medical Unit (WHMU) during the Bush administration, but it wasn’t until July 2013 that he became physician to the president.

Jackson served in that role until March 28, 2018. He is currently a Republican U.S. Congressman representing Texas’s 13th district.

Joe Biden just fell 3 times in a row trying to go up the stairs to Air Force One pic.twitter.com/gTUTckUH32

Rep. Jackson’s comments come in the wake of not only Biden’s stair troubles but also the president referring to Vice President Kamala Harris as “President Harris.”

“Notice when President Biden runs up the stairs of Air Force One, and last year, of course, he was mocking President Trump going down a ramp when he was at West Point,” Siegel told Carlson. “Now he’s saying I’m a runner.”

“Well, he actually isn’t a runner anymore, by the way, but he slips several times on that ramp,” Siegel added.

Jackson Had Concerns About Biden’s Health Before The Election

“And I have a question, could he have had a misstep?” Dr. Siegel continued. “Could it be the wind the way the White House is saying?”

“Could it be related to his broken foot last year and the boot he wore?” Siegel added. “Or, could it be a gait problem related to a cognitive problem?”

“I think the American people have the right to know the answer to that,” the doctor added.

In August, Rep. Jackson expressed concerns about Biden’s health during a conversation with Donald Trump, Jr.

“I won’t make any particular diagnosis about dementia,” Jackson said of Biden. “But what I will say is that something is not right.”

RELATED: ‘Something Is Not Right’ With Biden, Obama White House Doctor Claims

At the time, due to signs of possible deteriorating health, Jackson argued that Biden was getting so bad that he is “not comfortable” with him possibly becoming president.

Jackson said, “Speaking as someone who was in the White House, [I] saw him frequently around the West Wing and other places like that.”

“I know he’s always been prone to gaffes, but these aren’t gaffes anymore,” Jackson said. “He can’t form sentences.”

“Sometimes, he can’t complete a thought,” he continued. “I mean, he gets stuck, and he doesn’t know how to get out of the situation that he’s in.”

“And he just finally has to give up,” Jackson noted.

It should be noted that Biden has yet to give a press conference, breaking a record of over 100 years when it comes to presidents speaking to the press by this time in their presidencies.

The Warning Lights Are Flashing at Biden’s Domestic-Change Factory

[VIDEO] After Yesterday’s Testimony, Jesse Waters Has Figured Out Exactly What Fauci…