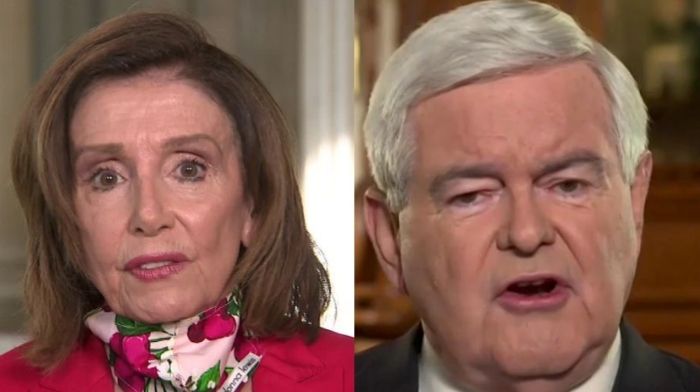 Former House Speaker Newt Gingrich spoke out to blast the current House Speaker Nancy Pelosi (D-CA) for running a “machine-like House” as she tries to force the Democratic agenda through Congress.

Gingrich Sounds Off On Democrats In The House

While appearing on New York WABC 770 AM radio’s “The Cats Roundtable” on Sunday, Gingrich said that members of the House are acting like “robots” in voting in-step with Pelosi. He added that the “machine-like” process is “a total collapse of the legislative process.”

“I think that it really tells you how the system is evolving that they’re ramming through all of this legislation,” Gingrich said of the House under Pelosi’s leadership.

He went on to add, “They have a five-vote margin, and basically, they’re saying to their members, ‘You don’t have to read anything. You don’t have to know what’s in it. We don’t have to have any hearings. You can’t offer any amendments. All you need to know is show up and vote yes.’”

Gingrich Zeroes In On Pelosi

“And It is the most machine-like House I can remember going back to Joe Cannon in around 1905. And these folks don’t represent anybody except Nancy Pelosi,” he continued. “And so, they walk in. They’re told, ‘We’re bringing up this next bill and vote yes.’ And they go, ‘Absolutely.’ And it’s a total collapse of the legislative process.”

“[T]he Democrats are expected to automatically vote yes no matter what. I mean, it’s working, but it has nothing to do with a free society or a representative government,” Gingrich added. “It’s just pure machine politics. And that to me has been probably the biggest surprise of what’s happened so far this year.”

Not stopping there, Gingrich later described Democrats in the House as “Pelosi’s robots.”

“[Y]ou’re getting an automatic, robotic, you know, sort of like Pelosi’s robots are walking out there, and they’re voting yes automatically,” he said. “If the Republicans offer an amendment — even if it’s a smart amendment — they vote no automatically. The same thing is happening in the Senate.”

Check out Gingrich’s full interview below.

In the months since the presidential election, Gingrich has been critical of Pelosi, Joe Biden, and their fellow Democrats. Given his latest comments, it does not seem like Gingrich will be backing down and refraining from attacking the left anytime soon.

This piece was written by James Samson on March 22, 2021. It originally appeared in LifeZette and is used by permission.

Read more at LifeZette:
Biden Accuser Tara Reade Slams Him And Democrats For Reaction To Cuomo Claims
Gretchen Whitmer Gets Bad News As Michigan House Makes Moves To Subpoena Her Former Health Director
Chelsea Handler Says That ‘Everyone Has To Give A Little Bit Away Who Has Too Much’