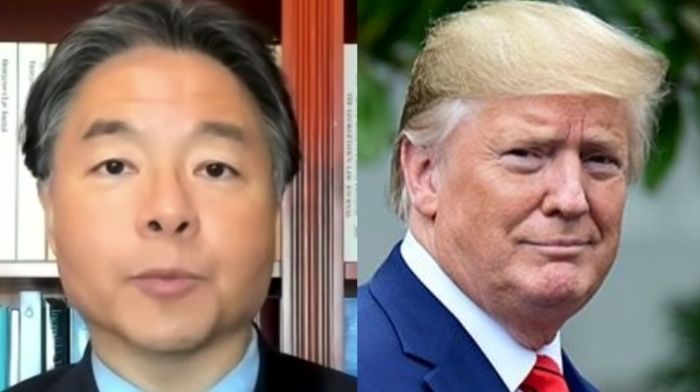 Representative Ted Lieu (D-CA) went on MSNBC on Friday to outrageously claim that former President Donald Trump gave people “permission to attack” Asian-Americans by referring to the coronavirus as the “China virus” and “Kung flu.”

“Can you just describe the connection between the smear uttered so many times by the former president, we lost track, but repeated this week in an interview on Fox News, describing the coronavirus as the ‘China flu” or the ‘Kung flu.’ What happens after that?” anchor Nicolle Wallace said.

“What happens after all of his millions of supporters hear that and their frustration and anger builds about the lockdowns or the other challenges of the pandemic?” she asked. “What happens with those kinds of smears?”

Related: MSNBC Contributor Says Trump Is ‘Responsible’ For Atlanta Shootings Because Of His ‘Language’ And ‘Behavior’

“When the former president uses terms like Kung flu, racist terms in describing this virus, it gives people more permission to attack Americans who happen to be of Asian descent,” he added.

“I am not a virus, and there is really no evidence whatsoever that Asian-Americans somehow transmit this virus more than anybody else,” he added. “In fact, you’ll more likely get the virus if you don’t get vaccinated, in you don’t wear a mask and if you don’t social distance.”

Related: China’s Useful Elitists: Why Are Westerners Covering For Beijing?

Lieu made similar comments during a CNN appearance.

“When the former president used racist terms like Kung flu, you can see that there was also an increase in hate crimes against Asian-Amerans last year,” Lieu said, according to Mediaite. “Nearly 150% spike in 16 major cities.”

“And as of March, there’s been nearly 3800 reported incidents of hate crimes and hate incidents,” he added. “I just ask my Republican colleagues to please stop using ethnic identifiers in describing the coronavirus. I am not a virus. When they say it, it hurts Asian-Americans.”

This piece was written by James Samson on March 20, 2021. It originally appeared in LifeZette and is used by permission.