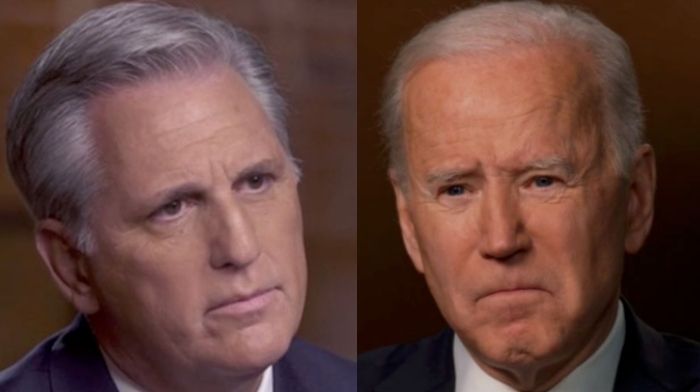 House Minority Leader Kevin McCarthy (R-CA) went on “Fox & Friends” on Friday to discuss the crisis that is taking place at the U.S./Mexico border at the moment.

McCarthy went on to say that what is happening is “more than just a crisis,” describing it as a “human tragedy” because of the surge of immigrants coming in that he says are not being tested for COVID-19. The House Minority Leader then called on Joe Biden to reinstate former President Donald Trump’s immigration policies to solve the problem.

“Two weeks ago, I did send [President Joe Biden] a letter, using to sit down with him to talk about this crisis on ways to solve it,” McCarthy said. “The … president didn’t even respond with a meeting, nor did the administration respond.”

“So, I sent him another letter yesterday after going down to the border with 13 members,” he continued. “And what we saw is it’s more than a crisis. This is a human tragedy.”

“What you are finding is what he needs to do very clearly we put solutions in this letter. He has to be very clear to tell people not to come,” McCarthy added. “You know, back in the debate in June, he told immigrants to immediately surge the border. He needs to finish the wall — the portions that were being built. He needs to reinstate the Remain in Mexico. He needs to keep Title 42.”

“The facility I went to that the secretary hopefully will go today is a brand-new facility built under the Trump administration –98,000 square feet,” McCarthy continued. “They thought they would never hit capacity.”

“On Monday, they hit capacity,” he concluded. “You saw children everywhere. It’d break your heart. At the same time, they were moving 1,000 children to Midland, 3,000 to Dallas and to more cities across this nation. And they are not testing them for COVID.”

This came after White House Press Secretary Jen Psaki could not offer a timeline when asked when the public would be able to see the conditions inside border facilities. One reporter pointed out that it has been a whopping three weeks since Psaki was first asked about access for journalists inside facilities, saying, “Why are we still not seeing any images inside these facilities?”

“The DHS oversees the Border Patrol facilities, and we want to work with them to ensure we can respect the privacy and obviously the health protocols required by COVID,” the press secretary replied.

The reporter then pointed out that the Biden administration has not yet released photos either.

“Again, we remain committed to sharing with all of you data on the number of kids crossing the border, the steps we’re taking, the work we’re doing to open up facilities, our own bar we’re setting for ourselves, improving and expediting the timeline and the treatment of these children,” Psaki said.

“And we remain committed to transparency,” she added. “I don’t have an update for you on the timeline for access, but it’s certainly something we support.”

This piece was written by James Samson on March 20, 2021. It originally appeared in LifeZette and is used by permission.