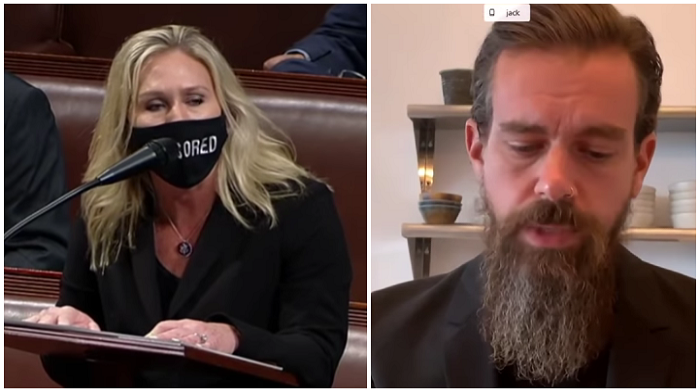 Editor’s Note: Rep. Greene has claimed that Twitter explained the suspension as an accident. A tweet from the Rep. has been added to this article.

Greene posted a screenshot of a message from the social media platform stating her account was “temporarily limited” and that she would be “limited to only sending direct messages … no tweets, retweets or likes.”

“Today Democrats are introducing a resolution to EXPEL me from Congress,” Greene posted on Parler.

“And all of a sudden overnight, Twitter suspended me at 1 am for 12 hours for absolutely no reason, with no explanation,” she continued. “They’re doing everything they can to silence me because I am a threat to the Swamp!”

Today Democrats are introducing a resolution to EXPEL me from Congress. And all of a sudden overnight, Twitter suspended me at 1 am for 12 hours for absolutely no reason, with no explanation. They’re doing everything they can to silence me because I am a threat to the Swamp!

Just after Noon on Friday, Rep. Greene was back on Twitter, where she explained that Twitter told her the suspension was levied “in error.”

I was just told @Twitter suspended me for 12 hrs in “error,” on the same day Dems introduced a resolution to expel me from Congress.

Twitter’s little error wasn’t resolved until after 12 hrs.@jack which employee made the “error?”

Reply to my email, Jack

The purported temporary suspension of Marjorie Taylor Greene’s account comes as House Democrats introduced a resolution to have her expelled from Congress.

CNBC reports that Twitter executives have not confirmed the suspension and there is no evidence linking the action to today’s move by Democrats.

“The action comes as House Democrats move to expel the conspiracy-embracing congresswoman from Washington,” they write.

The Political Insider reported Thursday that Gomez, along with 72 other Democrat representatives, would introduce a “privileged” resolution to expel Greene on Friday.

The ‘privileged’ label allows the matter to come up for a vote at any time.

Gomez has cited past social media posts by Greene as a reason to have her expelled from Congress.

“I believe some of my Republican colleagues, and one in particular, wish harm upon this legislative body. And I’m not saying this for shock value,” Gomez during a speech on the House floor Friday.

“It’s the conclusion I drew after a member of Congress advocated violence against our peers, the speaker and our government.”

Democrats have declared me Public Enemy Number One.

Tomorrow, 72+ radical Socialists are introducing a resolution to EXPEL me from Congress.

And it’s all because I stand for the PEOPLE over politicians.

RELATED: Poll: The Republican Party Is More Marjorie Taylor Greene Than It Is Liz Cheney

Greene (R-GA) came under fire after it was discovered she “liked” controversial comments on social media, including one that said “a bullet to the head would be quicker” in a discussion to remove House Speaker Nancy Pelosi (D-CA).

She has also dabbled in QAnon conspiracy theories.

When Democrats stripped her from her committee roles in February, Greene apologized for her actions.

“I’m sorry for saying all of those things that are wrong and offensive, and I sincerely mean that,” she said at the time. “I’m happy to say that. I think it’s good to say when we’ve done something wrong.”

“These were words of the past, and these things do not represent me,” Marjorie Taylor Greene apologizes for her past statements on QAnon and 9/11 https://t.co/7JoEb8gErP pic.twitter.com/J276uo2gSw