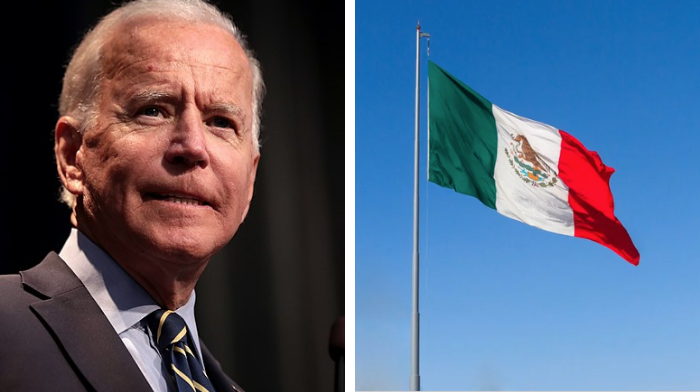 On Thursday, the New York Times reported that the Biden administration “has been quietly pressing Mexico to ramp up its efforts to limit the flow of migrants,” a move similar to one of former President Trump’s strategies for dealing with illegal immigration.

According to the Times, “Democrat President Joe Biden’s border crisis is rapidly spiraling out of control as new reporting on Tuesday evening indicated that the number of unaccompanied children being held in detention facilities is more than 300 percent higher than previously known.”

The report notes that Biden administration could be using a potential vaccine distribution initiative to help pressure Mexico into helping with the border crisis.

“The announcement of the vaccine distribution came at a critical time in negotiations with Mexico,” the Times report continued.

The report noted, “President Biden has moved quickly to dismantle some of former President Trump’s signature immigration policies, halting construction of a border wall, stopping the swift expulsion of children at the border and proposing a pathway to citizenship for millions of immigrants in the United States.”

Then the report revealed and aspect of the Biden administration’s Mexico dealings they probably do not want emphasized.

“But he is clinging to a central element of Mr. Trump’s agenda: relying on Mexico to restrain a wave of people making their way to the United States,” the Times added.

REPORT: Apparently @JoeBiden is reintroducing a policy President #Donald Trump had in place…The Biden administration has been quietly pressing #Mexico to ramp up its efforts to limit the flow of migrants. https://t.co/ncJnh3AQyi

The story continued, “Anticipating a surge of migrants and the most apprehensions by American agents at the border in two decades, Mr. Biden asked President Andrés Manuel López Obrador of Mexico in a video call this month whether more could be done to help solve the problem, according to Mexican officials and another person briefed on the conversation.”

“The Biden administration is facing intense pressure, scrambling to find shelter space for a growing number of migrant children and teenagers held in American detention facilities along the border,” the Times reported.

This now marks two Trump immigration tactics that Biden has adopted while facing a humanitarian crisis at the border: separating unaccompanied minors (though the Trump policy differed in separating children from their parents, while Biden’s policy separates children from non-parent adults), and enlisting Mexico’s help.

Some could argue that, facing crisis, Biden is reluctantly adopting policies he would rather not adopt due to their effectiveness.

RELATED: Florida Gov. DeSantis Says ‘There Is No Room’ In Florida Classrooms For Critical Race Theory

On Tuesday, the New York Post reported that Biden’s DHS head is admitting that border crossings will rise to heights unseen in the last two decades.

“Homeland Security Secretary Alejandro Mayorkas on Tuesday disclosed that the migration surge at the US-Mexico border is likely the worst the situation has been in 20 years,” the Post reported.

The reported added, “Mayorkas, who has refused to call the situation a ‘crisis,’ said in a statement that “[w]e are on pace to encounter more individuals on the southwest border than we have in the last 20 years.”