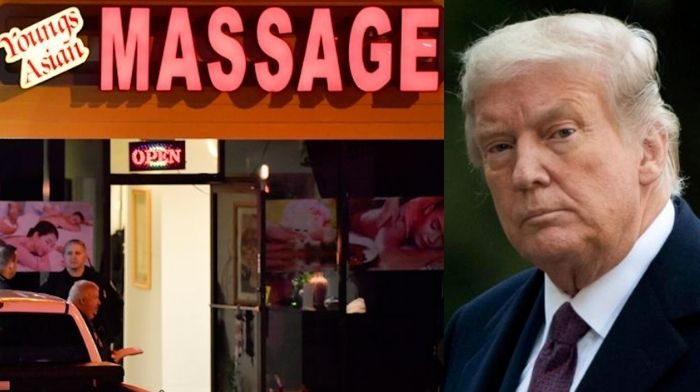 While Barnicle admitted that Trump “didn’t pull the trigger in Atlanta,” he claimed that the former president was still “responsible” for the shooting because of his “language” and “behavior.”

“I am not a big fan of living in the past,” he began, before he did just that. “I believe in moving forward. Keep that line moving, go forward into the future, but we opened this segment with a clip of the former president speaking.

“Now, Donald Trump didn’t pull the trigger in Atlanta, but Donald Trump certainly was responsible for the anger and the fear and the suspicion that exists in great degree in this country — much more so than ever in the past,” Barnicle continued.

“And he’s not to blame for a history of racial strife in this country, but he certainly is to be blamed for enhancing it with his inaction and his cowardice in addressing it,” he added. “We’re talking about rigged elections now. We’re still talking about January 6.”

“All of that is the gift that keeps on giving, presented to us by a man who never, ever should have been president,” he concluded. “And the stain of his presidency is still in existence today, and I fear how long it’s going to last. I mean, the job that Joe Biden has is enormous enough, but dealing with the underbelly of all of these causes only adds to the degree of difficulty in the presidency.”

Related: Trump Recommends Vaccine To His Supporters: ‘It Is A Great Vaccine’

It should be noted that according to the Associated Press, police have said that this shooting was not racially motivated. Instead, 21-year-old gunman Robert Aaron Long was a sex addict who went on his rampage to remove what he saw as temptation.

“He apparently has an issue, what he considers a sex addiction, and sees these locations as something that allows him to go to these places, and it’s a temptation for him that he wanted to eliminate,” said Cherokee County sheriff’s Capt. Jay Baker.

The media and the left have ignored these facts to claim that this was actually a hate crime based on anti-Asian sentiments in regards to COVID-19, which originated in China.

Read more at LifeZette:
Man Arrested In Michigan For Threatening To Kill Whitmer, Biden, And Pelosi
Kayleigh McEnany Blasts Pelosi For ‘Flouting The Will of The People’ With Her For The People Act
Ivanka, Don Jr. Won’t Be Able To Run In 2024 Because They’ll Be Stuck In Court, Cousin Mary Trump Predicts