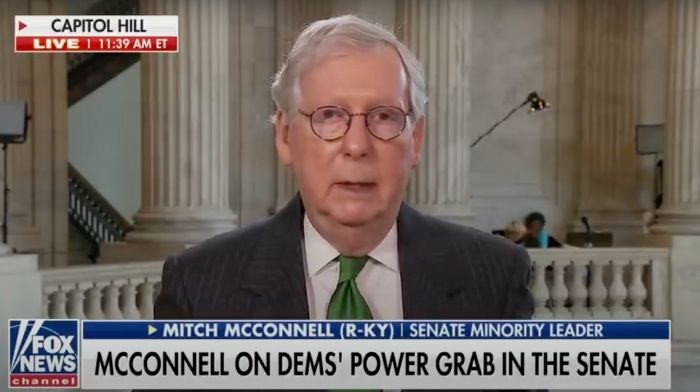 Senate Minority Leader Mitch McConnell (R-KY) went off on Democrats on Tuesday, saying that the American people did not give them a “mandate” to get rid of the filibuster and “completely transform” this country.

While appearing on Fox News, McConnell said that Democrats want to “steamroll” the Senate into a majoritarian body, which is what the House of Representatives is, because it is an “inconvenience” to them pushing through their radical agenda

“The Senate was created on purpose, not to function like the House — to slow things down, to kill bad ideas, to force bipartisanship,” McConnell said.

“[These were] all the things that the Democrats believed in as long as there was a Republican in the White House, or conveniently thrown aside as soon as they think there’s a chance that they can advance their steamroller agenda, which the American people, by the way, certainly did not give them a mandate to pursue in last November’s election,” he added.

Not stopping there, the Senate Minority Leader also threatened to turn the Senate into a “100-car pileup” and block “even the most basic aspects” of its function if Democrats eliminate the legislative filibuster.

“So let me say this very clearly for all 99 of my colleagues. Nobody serving in this chamber can even begin to imagine what a completely scorched-earth Senate would look like,” McConnell said.

“None of us have served one minute in a Senate that was completely drained of comity and consent,” he continued. “This is an institution that requires unanimous consent to turn the lights on before noon, to proceed with a garden-variety floor speech.”

Related: Mitch McConnell Says He Would Back Trump in 2024 if He Wins GOP Nomination

“I want our colleagues to imagine a world where every single task, every one of them, requires a physical quorum. Which, by the way, the vice president does not count in determining a quorum,” he added. “This chaos would not open up an express lane for liberal change … The Senate would be more like a 100-car pileup, nothing moving.”

Read more at LifeZette:
Meghan McCain Smacks Down Joy Behar After She Tries To Defend Andrew Cuomo Amidst Sexual Misconduct Scandal
Joy Behar Claims Antifa Is ‘Not A Real Thing’ – Gets Shut Down By Meghan McCain
Kayleigh McEnany Blasts Pelosi For ‘Flouting The Will of The People’ With Her For The People Act