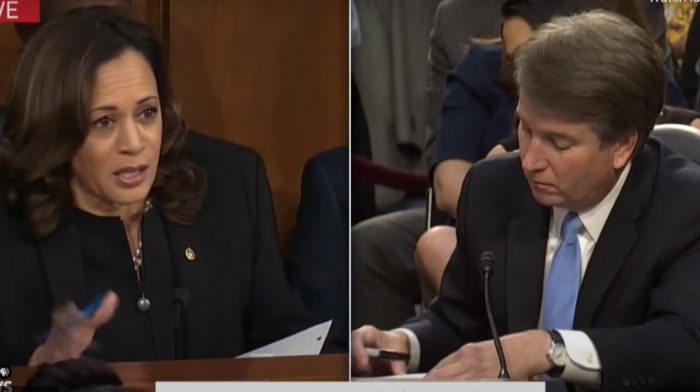 For 22 days – three weeks and a day – Vice President Kamala Harris has not taken a position on the sexual harassment allegations against embattled New York Gov. Andrew Cuomo.

The silence is very different from her past behavior regarding similar accusations against conservatives.

Kamala Harris says “I believe her” & calls for an FBI investigation into the allegations of sexual harassment.

But wait… she’s not talking about Cuomo. That’s what Kamala said about the phony allegations about Kavanaugh.

About Cuomo, Kamala is SILENT.

RELATED: Pelosi Claims There Will Be ‘Zero Tolerance’ If Sexual Harassment Claims Against Cuomo Are ‘Proven To Be True’

Kamala Harris On Justice Brett Kavanaugh’s Accuser: ‘I Believe Her’

On Tuesday, Harris was part of a United Nations event that celebrated the roles women hold in democratic societies.

But during this event, Harris’s willingness to declare, “I believe her,” in regards to Justice Brett Kavanaugh’s sexual assault accuser, Christine Blasey Ford, during his Senate confirmation hearings for the Supreme Court apparently had no bearing on the Cuomo controversy.

Harris went much further than merely mentioning she “believed” Ford.

When Ford was chosen as one of TIME Magazine’s 100 Most Influential People, the glowing snippet for Ford was authored by none other than Harris.

Harris words for Ford are exactly as readers would imagine it to be, opening with:

Her story, spoken while holding back tears, shook Washington and the country. Her courage, in the face of those who wished to silence her, galvanized Americans. And her unfathomable sacrifice, out of a sense of civic duty, shined a spotlight on the way we treat survivors of sexual violence.

At her core, she is a teacher. And through her courage, she forced the country to reckon with an issue that has too often been ignored and kept in the dark.

Are the allegations against Cuomo being “kept in the dark” by Harris?

The new Vice President also received praise from the left for her “tough” questioning of Kavanaugh during his confirmation hearings.

At the U.N. event, Harris did not even mention Cuomo and the allegations against him.

“The status of democracy also depends fundamentally on the empowerment of women, not only because the exclusion of women in decision making is a marker of a flawed democracy, but because of the participation of women strengthens democracy,” Harris said.

The Vice President continued, “I am proud to report that while the United States still has work to do, we too are making progress and that women strengthen our democracy every day.”

In December, Feminist.org ran a headline, “Top 10 Feminist Moments of 2020,” highlighting Harris’ 2020 victory speech for breaking “multiple barriers by becoming the first woman, and woman of color, to hold the position.”

Yet, the first “woman, and woman of color, to hold the position” remains quiet on the accusations against Andrew Cuomo.

On March 11, Harris was asked for comment about the Cuomo scandal.

“Madame Vice President, do you have any comment on Gov. Cuomo?” a reporter asked.

Regardless of what position Vice President Harris eventually takes on Andrew Cuomo and the charges leveled against New York’s governor, her silence to date speaks volumes.