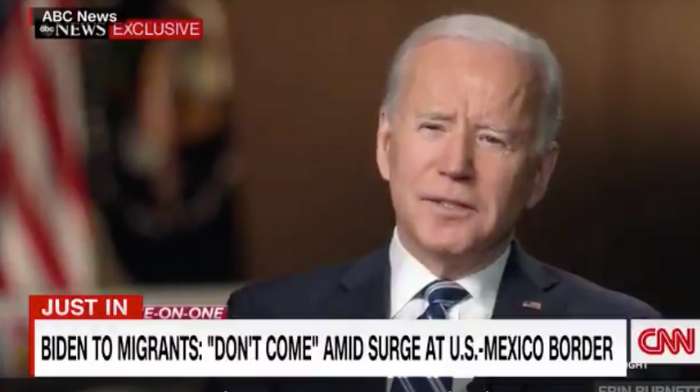 President Joe Biden attempted to stem the flow of illegal immigrants crossing the border as the crisis hits new levels, telling them, “Yes, I can say quite clearly: Don’t come over.”

Biden made his remarks in an interview with ABC News’ George Stephanopoulos on Tuesday, in response to a direct prompt from Stephanopoulos.

Biden Does Damage Control As Border In Crisis

On the border situation, Stephanopoulos asked Biden, “Do you have to say quite clearly, ‘Don’t come’?”

“Yes, I can say quite clearly: Don’t come over,” Biden said. “Don’t leave your town or city or community.”

Stephanopoulos said to Biden, “Was it a mistake not to anticipate this surge?”

In an interview with ABC News, President Biden said that his message to migrants is “don’t come over” amid a surge of migrants and unaccompanied minors on the southern US border. https://t.co/Ohcj4vvYWB pic.twitter.com/ZblZeaKFJC

Biden: ‘I Heard The Other Day That They’re Coming Because They Know I’m A Nice Guy’

After Stephanopolous’ meek attempt to question Biden’s claim by stating, “This one might be worse,” the new President offered one of his classic turns of phrase.

“The idea that Joe Biden said, ‘Come’ — because I heard the other day that they’re coming because they know I’m a nice guy, here’s the deal, they’re not,” he said.

Biden’s comments come after his Secretary of Homeland Security, Alejandro Mayorkas, released a statement about the level of illegal crossings.

On Tuesday, Mayorkas said in a DHS statement, “We are on pace to encounter more individuals on the southwest border than we have in the last 20 years.”

DHS Secretary Alejandro Mayorkas said, “We are on pace to encounter more individuals on the southwest border than we have in the last 20 years.”

This is the Biden crisis. pic.twitter.com/C4LkSCQqLU

RELATED: Pelosi Claims There Will Be ‘Zero Tolerance’ If Sexual Harassment Claims Against Cuomo Are ‘Proven To Be True’

Of course, Mayorkas blamed the Trump administration: “The prior administration completely dismantled the asylum system.  The system was gutted, facilities were closed, and they cruelly expelled young children into the hands of traffickers.  We have had to rebuild the entire system, including the policies and procedures required to administer the asylum laws that Congress passed long ago. ”

Incredibly, CNN ‘fact-checked’ Mayorkas’ claim, using policy analysts to essentially say that the situation really isn’t that dire, because he left out some nuance.

The Biden administration has consistently worked to undo many of former President Donald Trump’s immigration policies, including halting construction on his Southern border wall with Mexico.