Trump Recommends Vaccine To His Supporters: ‘It Is A Great Vaccine’ 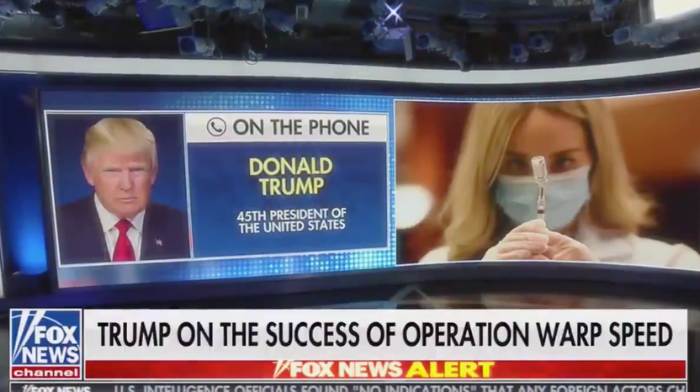 On Tuesday, former President Donald Trump encouraged Americans to get the coronavirus vaccine, saying that the various types were safe, effective, and even “great.”

Trump made his remarks during his first major interview after leaving the Presidency, with Fox News host Maria Bartiromo.

Adding, “We have our freedoms, and we have to live by that. And I agree with that also.” pic.twitter.com/eMR0YDfTRp

Trump Touts Vaccine: ‘It Is A Safe Vaccine And It Is Something That Works’

Trump, however, did not make a demand: “But again,” he added, “we have our freedoms and we have to live by that and I agree with that also.”

Trump then praised the vaccines and assured viewers that it worked.

“But it is a great vaccine,” Trump continued. “It is a safe vaccine and it is something that works.”

A number of polls have shown that a significant number of Republicans are hesitant or outright resistant to receiving the vaccine.

Some on the left and in the media have hoped Trump might give a more hearty endorsement of the vaccines to dissuade some Republicans of any concerns they might have.

That is what Trump appeared to do on Tuesday night, while also recognizing the matter as a choice.

“Joe Biden is only implementing the plan that we put in place, and if we had an honest media — which we don’t — they would say it loud and clear.” #CPAC pic.twitter.com/nR19o2fJ1G

Trump At CPAC: ‘Everybody Go Get Your Shot’

But advocating for Americans getting the vaccine was not something new for Trump this week.

Trump said at the 2021 Conservative Political Action Conference in February, “We took care of a lot of people — including, I guess, on December 21st, we took care of Joe Biden, because he got his shot, he got his vaccine.”

“It shows you how un-painful all that vaccine shot is,” Trump emphasized. “So everybody go get your shot.”

Trump did not appear in a recent Ad Council campaign for vaccines, however:

Former presidents and first ladies urge Americans to get vaccinated in new PSA released by The Ad Council and COVID Collaborative.

RELATED: Lisa Murkowski Censured By Alaska GOP After Turning On Trump – Primary Challenger To Be Recruited

The public service announcement showed every other living former president and some first ladies encouraging Americans to get vaccinated.

“Now, it’s up to you,” Carter said to close the video.