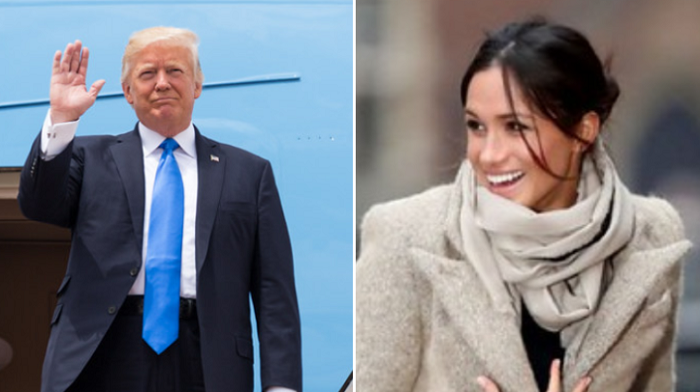 Former President Donald Trump mocked Meghan Markle’s rumored desire to run for President and indicated it might be enough to draw him into the 2024 race.

Trump, who was being interviewed by Fox News host Maria Bartiromo, responded to rumors that Markle has been meeting with Democrat operatives to discuss a possible bid for the presidency.

One source told the Daily Mail that “Democratic party networks are buzzing with talk about Meghan’s political ambitions and potential backers.”

Bartiromo asked Trump about his thoughts on the matter.

“Well, I hope that happens because if that happened, then I think I’d have an even stronger feeling toward running,” Trump countered.

Former President Trump is asked by @MariaBartiromo about Meghan Markle meeting with Democratic operatives about running for president:

“If that happened, I think I’d have an even stronger feel toward running.” pic.twitter.com/Ja69PmiRjg

RELATED: Michelle Obama Says She’s Not Surprised By Allegations Of Racism In The Royal Family

Trump went on to criticize Meghan Markle over allegations she made regarding the British royal family and racism.

“I’m not a fan of hers. I think that what she talks about the royal family and the queen — I happen to think, I know the queen, as you know,” he said.

“I’ve met with the queen and I think the queen is a tremendous person,” added Trump. “And I’m not a fan of Meghan.”

Trump has priceless reaction to Meghan Markle eyeing a presidential run by floating his own potential run. https://t.co/xvRGZ9iUI6

Markle and her husband Prince Harry leveled astonishing allegations against the royal family during an interview with Oprah Winfrey earlier this month.

Among the claims were accusations that the couple’s son was denied a royal title and that a member of the family held “concerns and conversations about how dark his skin might be when he’s born.”

While Trump is skeptical, former First Lady Michelle Obama said she wasn’t shocked by the claims.

“This, first and foremost, is a family. I pray for forgiveness and healing for them so that they can use this as a teachable moment for us all.” –@MichelleObama on Meghan Markle’s tell-all interview with Oprah Winfrey pic.twitter.com/kgLU2gyFei

While Trump’s comments were most likely meant in jest, indicating beating someone so unimpressive and clearly troubled would be easy, could he give it another run in 2024?

At a party this past Christmas, Trump hinted that he would be back in the White House in 2024.

“We’re trying to get another four years,” he said as he mounted unsuccessful legal battles against the 2020 election results, “but otherwise I’ll see you in four years.”

Trump at the White House Christmas party: “It’s been an amazing four years. We’re trying to do another four years, otherwise I’ll see you in four years.”

Senate Minority Leader Mitch McConnell said he would “absolutely” back Trump in 2024 should he win the Republican nomination.

The former President is currently sitting atop The Political Insider’s poll of who readers would want to see as the GOP nominee in 2024, well ahead of Florida Governor Ron DeSantis and his son, Donald Trump Jr.

China’s Useful Elitists: Why Are Westerners Covering For Beijing?