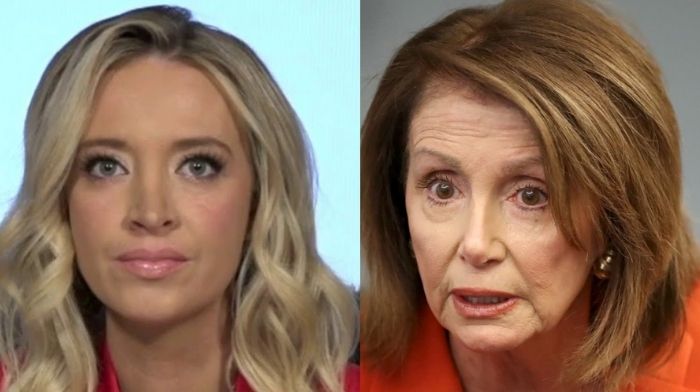 Former White House Press Secretary Kayleigh McEnany ripped into Speaker of the House Nancy Pelosi on Monday night for her massive electoral reform bill, the For The People Act.

While appearing on Sean Hannity’s Fox News show, McEnany claimed that this bill was nothing more than a reckless attempt from the left to nationalize elections.

“These are really important things that absolutely influence an election, and Democrats are trying to memorialize it, federalize it with H.R. 1. This is one of the most important pieces of legislation, I think, in the next two years that we’ll see,” McEnany said.

“We’ve got to stand against it because integrity matters. State legislatures should be paving the way for elections, not lawless, undemocratic, unconstitutional actors like the secretaries of states who are Democrats who are flouting the Constitution,” she added.

“What I hope to happen in any election is for the vote of the American people to be accurately counted and that vote — be it a Democrat, be it a Republican, whatever it may be — to be accurately put forward and to be honored and respected,” she continued.

“What Nancy Pelosi is doing is flouting the will of the people, throwing it away,” McEnany concluded. “Who she wants should be the person who is there saying ‘I run elections, I federalize elections,’ where all I want is for the vote of the American people to be truly and accurately counted.”

This comes after McEnany slammed Joe Biden over the weekend during another Fox News appearance in which she said that the president is a “radical.”

“This was supposed to be moderate Joe Biden, we were told,” she said.

“But as any other Democrat, he is a radical who wants control via the education system, via COVID relief, creating this massive welfare state, with the Equality Act, which is a power grab on churches and H.R.1. nationalizing our elections – he supports all of these things,” she said. “He’s a progressive, he was never a moderate.”

Related: Kayleigh McEnany Reveals She ‘Warned The Reporters’ That Biden Would Rarely Talk To The Press

Not stopping there, McEnany balked at Biden “lament[ing] closed schools and what it does to children and closed business,” in his primetime address to the nation on Thursday.

“Well, guess who’s in charge of those closed businesses?” McEnany said. “The Democrat governors who are keeping them closed. ‘Cause down here in Florida … we celebrated Independence Day, we gathered in small groups, we have an open society and we have personal responsibility alongside it.”