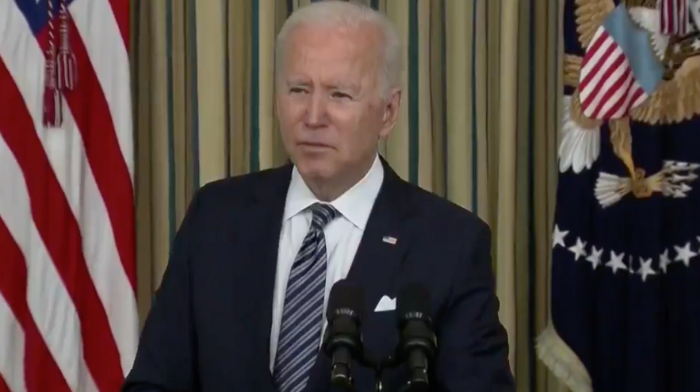 On Monday, President Joe Biden urged local pastors and priests to help get supporters of former President Donald Trump, who may be skeptical of being immunized, to take the COVID vaccine.

Biden made his comments during a White House event on COVID-19 relief, in response to a question from a reporter.

Biden: “I urge all local docs and ministers and priests to talk about why it’s important to get that vaccine. And even after that, until everyone is in fact vaccinated, to wear this mask.” pic.twitter.com/7lyDkCRLSV

Biden: “I Urge All Local Docs, And Ministers And Priests’ To Tell ‘MAGA Folks’ To Take Vaccine

A reporter asked the President a question about helping to “promote the vaccine among skeptics.”

Biden replied, “I urge all local docs, and ministers and priests to talk about why, why it’s important to get that vaccine, and even after that until everyone is in fact vaccinated to wear this mask.”

Biden said he and his staff have gone over how to get skeptical Republicans onboard with the vaccines.

It should be noted that during his Conservative Political Action Conference in February, Trump told attendees to “go get your shot.”

When White House Press Secretary Jen Psaki was asked if the Biden administration would ask former President Trump to help with these efforts, her answer indicated that the ball was in Trump’s court.

“If former President Trump woke up tomorrow, and wanted to be more vocal … certainly we’d support that,” Psaki said during the White House press briefing on Monday.

Biden’s Vaccine Comments During The Election

During the presidential campaign, candidate Biden made interesting comments about vaccine developments under the Trump administration, including claims that proper testing might not be done.

Reporter Errol Barnett asked Biden, “What’s key to people feeling safe to go back to work and school is a vaccine. A recent CBS News, UGOV poll found that some 70% of Americans would either wait to get a vaccine and see what happens to other people or not get one at all. That’s a huge segment of the population. How then would you secure that every American gets a vaccine as soon as possible considering that distrust?”

The fact is that the way he talks about the vaccine is not particularly rational. He’s talking it being ready. He’s going to talk about moving it quicker than the scientists think it should be moved. It matters to let the people know that it is all transparent, exactly what the facts are. Let the medical community writ large speak to it so that there’s transparency.

Look, I think people are going to, as the poll show and we talked about it today with the two docs and my staff, that in fact people don’t believe that he’s telling the truth. Therefore, they’re not at all certain they’re going to take the vaccine. One more thing, if and when the vaccine comes, and it’s not likely to go through all the tests that needs and the trials that are needed to be done, and the question is, is he going to seek emergency move?

On Thursday, an NPR/PBS/Marist poll showed that 41 percent of Republicans had not received the vaccine or would get it.

In addition to Trump’s urging at CPAC, his office also issued a press release on March on 10 to the same effect:

A Statement from the Office of the 45th President: pic.twitter.com/FeQYD3L2j7