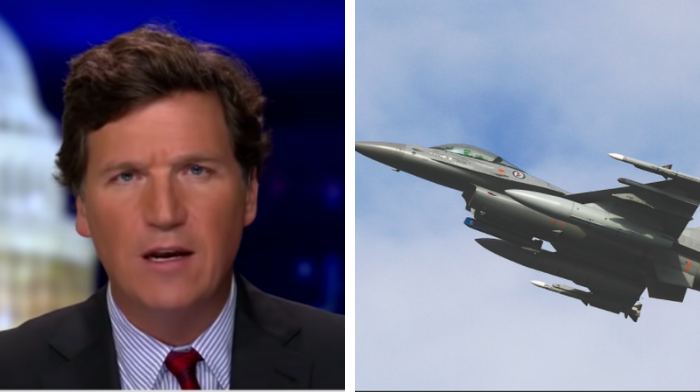 Still outraged by Fox News host Tucker Carlson contrasting of China’s push for a “more masculine” military against the U.S. military’s focus on inclusivity for women, an official Marine Corps account and other military officials attacked Carlson throughout the weekend.

The controversy comes as a previously classified war game conducted by the Air Force shows the U.S. losing a military to conflict to China.

The Marines’ tweet read (it has since been deleted) “What it looks like in today’s armed forces @TuckerCarlson. Get right before you get left, boomer.” The post included female Marines and a host of hashtags celebrating women Marines.

Tucker Carlson doesn’t think women can serve in the military. Pretty bold words from a frozen food heir who couldn’t be bothered to serve himself.

Michael Grinston, the Army’s senior enlisted leader, tweeted, “Women lead our most lethal units with character. They will dominate ANY future battlefield we’re called to fight on.”

“@TuckerCarlson’s words are divisive, don’t reflect our values,” he added. “We have THE MOST professional, educated, agile, and strongest NCO Corps in the world.”

Women lead our most lethal units with character. They will dominate ANY future battlefield we’re called to fight on. @TuckerCarlson’s words are divisive, don’t reflect our values. We have THE MOST professional, educated, agile, and strongest NCO Corps in the world. https://t.co/WeqWk6IWDq

The tweets kept coming in the wake of Carlson’s segment.

Drama TV – my response to Mr. Carlson’s comments on women in the Armed Forces. @TuckerCarlson pic.twitter.com/acix7CFLO9

This is me, yesterday, conducting a re-enlistment for one of the tens of thousands of women who serve in our Army. Just a reminder that @TuckerCarlson couldnt be more wrong. https://t.co/M1MHe5zHrf

The most direct official military comments came from the II Marines Expeditionary Force, which later apologized.

While many of the tweets have been deleted, journalist Jack Posobiec – a former Navy lieutenant who worked in the Office of NAval Intelligence, saved them:

Hi @CMC_MarineCorps! Are these official statements from the @iimigofficial about how the Marines view US civilians? pic.twitter.com/FeMU613cn9

Perhaps realizing that it’s not the role of official military figures to wade into politics and attack journalists, the group eventually apologized after deleting the incriminating comments:

We are human and we messed up. We intended to speak up for female Marines and it was an effort to support them. They are a crucial part to our corps and we need them to know that. We will adjust fire and ensure the utmost professionalism in our tweets.

The official account of Army Counterintelligence sent out a series of tweets:

They wanted to be clear that “diversity is their strength”:

The strength of Army CI is diversity. https://t.co/DHDLCiacEs

The strength of Army CI is diversity. https://t.co/GuwZYbi0vF

Maybe @ArmyChiefStaff would be interested in what his Generals are posting too. https://t.co/vUNCaA1lBN

The aforementioned Posobiec weighed in on the political nature of the attacks on Carlson:

Thank you, Senator. The military has no authority over political decisions and any official who violates this sovereign right must be reprimanded swiftly.

Senator Ted Cruz found the political comments and targeting of a journalist disturbing enough to demand a meeting with the Marines:

Under Biden, the military is launching political attacks to intimidate Tucker Carlson & other civilians who criticize their policy decisions.

Officials in uniform are being used for the campaign.

I’ve demanded a meeting with the Commandant of the USMC to put a stop to it. pic.twitter.com/Ihl8xRJr0S

Most Seemed To Ignore Carlson’s Contrasting Of The U.S. Military With China’s

While most focused on Carlson’s criticism of the U.S. military and women’s role in it, they seemed to miss his comparison of American attitudes to those of China when it comes to their military.

“So we’ve got new hairstyles and maternity flight suits,” Carlson said on his program on Tuesday. “Pregnant women are going to fight our wars.”

“It’s a mockery of the U.S. military,” he continued. “While China’s military becomes more masculine as it’s assembled the world’s largest navy, our military needs to become — as Joe Biden says — more feminine, whatever feminine means anymore, since men and women no longer exist.”

The report was about a previously classified simulated conflict conducted by the U.S. Air Force in the fall that was supposed to represent the kind of U.S.-China military clash that could happen in the future, or about a decade from now.

The simulated conflict “began with a Chinese biological-weapon attack that swept through U.S. bases and warships in the Indo-Pacific region. Then a major Chinese military exercise was used as cover for the deployment of a massive invasion force.”

Yahoo News noted, “The simulation culminated with Chinese missile strikes raining down on U.S. bases and warships in the region, and a lightning air and amphibious assault on the island of Taiwan.”

Last fall, the U.S. Air Force simulated a conflict set more than a decade in the future that began with a Chinese biological-weapon attack that swept through U.S. bases and warships in the Indo-Pacific regionhttps://t.co/UJe6757zNs

“The highly classified war game, which has not been previously made public, took place less than a year after the coronavirus, reportedly originating in a Chinese market, spread to the crew of the USS Theodore Roosevelt aircraft carrier, taking one of the U.S. Navy’s most significant assets out of commission,” Yahoo News reported.

This was just the simulated conflict. China has been flexing its military muscle in a few ways.

Yahoo News continued, “Then in September in the midst of the war game, actual Chinese combat aircraft intentionally flew over the rarely crossed median line in the Taiwan Strait in the direction of Taipei an unprecedented 40 times and conducted simulated attacks on the island that Taiwan’s premier called ‘disturbing.”

“Amid those provocations, China’s air force released a video showing a bomber capable of carrying nuclear weapons carrying out a simulated attack on Andersen Air Force Base on the U.S. Pacific island of Guam,” the report added. “

US war games over China warn of likely defeat https://t.co/mzBud0wM1R

RELATED: Tim Scott Says We’ll Still Be Divided Until The Media Speaks Out Against Hate Black Conservatives Get Hit With

Does Tucker Carlson Have A Point About China’s Military Most Are Missing?

Yahoo News reported, “In case the new U.S. administration failed to get the intended message behind all that provocative military activity, four days after President Biden took office, a large force of Chinese bombers and fighters flew past Taiwan and launched simulated missile attacks on the USS Roosevelt carrier strike group as it was sailing in international waters in the South China Sea.”

Air Force Lt. Gen. S. Clinton Hinote, deputy chief of staff for strategy, integration and requirements, told Yahoo News about his observations of war games activity in recent years, “At that point the trend in our war games was not just that we were losing, but we were losing faster.”

Will U.S. military officials and other political leaders stop being outraged by Tucker Carlson’s un-PC observations long enough to consider that he might have had a point about China?

And that it is something America had better pay attention to?