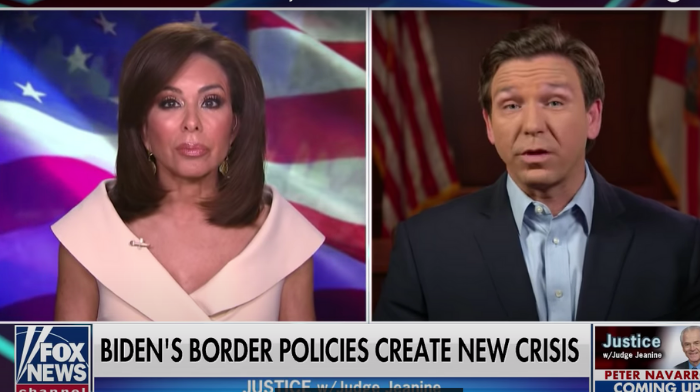 On Sunday, rising Republican star and Florida Governor Ron DeSantis criticized the Biden administration’s immigration policies, which he believes have ’caused’ the current border crisis and are ‘intentional.’

DeSantis made his comments during an appearance on FNC’s “Justice” with host Judge Jeanine Pirro.

DeSantis: ‘I Think That This Is Intentional. I Think This Is Ideological’

DeSantis told Pirro that he believed the Biden administration was responsible for the ongoing crisis.

“It obviously is a disastrous change in policy, Judge,” he said. “If you look, Donald Trump had obviously the wall, which we all supported, but also safe third party agreements, as well as remain in Mexico.”

“And guess what happened? DeSantis added. “The border was under control.”

“So they’ve gone back on those policies, and they’ve created this crisis,” DeSantis said.

Beginning very early in his tenure, Biden made sweeping changes to existing immigration policy, as explained by Lawfare.

As DeSantis pointed out, Biden also ended President Trump’s emergency declaration, which stopped funding for the border wall, and ended “Remain in Mexico,” among many other immigration policy changes.

“So it’s a disastrous way to start an administration,” DeSantis continued. “I think most of the American people are going to be strongly opposed to this, and hopefully, they’ll reverse course.”

“You know, in Florida, though, we’re ready,” DeSantis said, touting his home state.

On Sunday, House Speaker Nancy Pelosi described the surge of unaccompanied children arriving at the border as a “humanitarian crisis.”

All the way back on February 7, the NYT ran a piece titled, “Migrant Families Force Biden to Confront New Border Crisis”.

DeSantis then noted who got it right and who got it wrong regarding border and immigration policy.

“Trump had it right at the border, Biden got it wrong.” – Florida Governor Ron DeSantis-

RELATED: Pelosi Refuses To Demand Cuomo Resign – Says He ‘Should Look Inside His Heart’ To See If He Can Lead Effectively

“When I became Governor, we banned sanctuary cities, and we also did e-verify,” DeSantis said.

“And so that’s not going to work in Florida, and hopefully, we can do those policies nationwide at some point, but there, Biden is going in the absolute wrong direction.”

“Trump had it right at the border,” DeSantis ended. “Biden has got it wrong.”

Eric Swalwell Screws Up Again…He Tries Clobbering Trump, But Ends Up Helping Him Instead