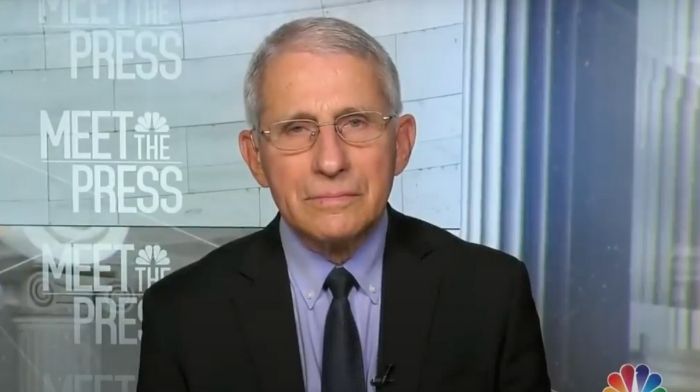 National Institute of Allergy and Infectious Diseases head Dr. Anthony Fauci spoke out on Sunday during an appearance on MSBNC to say that it is “so disturbing” that some people who voted for former President Donald Trump do not want to get the COVID-19 vaccines.

“I want to talk about vaccine. He has hesitancy here,” said “Meet The Press” host Chuck Todd. “We are seeing a bigger divide by politics. We talked about it earlier.”

For instance, among Trump voters, 47% have said they’ll not be vaccinated, 30% say yes, and half Republican men say they’re not going to take this vaccine,” he continued. “You have the PSA with all the former presidents except one, President Trump, in there. Do you think he needs to be enlisted here at all toll get his voters to take this vaccine?”

“Chuck, I hope he does because the numbers that you gave are so disturbing, how such a large proportion of a certain group of people would not want to get vaccinated merely because of political consideration,” Fauci replied. “It makes absolutely no sense, and I’ve been saying that for so long.”

“We’ve got to dissociate political persuasion from what’s common sense, no-brainer public health things,” he added. “The history of vaccinology has rescued us from smallpox, from polio, from measles, from all of the other diseases. What is the problem here?”

“This is a vaccine that is going to be l for millions of people,” Fauci said. “How some groups would not want to do it for reasons that I just don’t understand. I don’t comprehend what the reasons for that is when you have a vaccine that’s 94% or 95% effective, and it is very safe. I don’t get it.”

Related: Rand Paul Torches Fauci – He Sees Himself As A Greek Philosopher Of Sorts Who Tells You ‘Noble Lies’

Fauci also went on CNN on Sunday to say that coronavirus guidelines “will be much more liberal” by the Fourth of July if cases in the United States drop as more people get vaccinated.

“If by the time we get to the Fourth of July, with the rollout of the vaccine, we get the level of infection so low — I’m not going to be able to tell you exactly what the specific guidelines of the (US Centers for Disease Control and Prevention) are, but I can tell you for sure (guidelines) will be much more liberal than they are right now about what you can do,” Fauci said.

Read Next: Rand Paul: Fauci Will ‘Keep Us Masked Until The End of Time

This piece was written by James Samson on March 15, 2021. It originally appeared in LifeZette and is used by permission.

Read more at LifeZette:
Meghan McCain Confronts Schumer On His Hypocrisy About Biden’s Border Policies Compared To Trump’s
HR 1 Could Depend on Manchin and Sinema
Pelosi Refuses To Demand Cuomo Resign – Says He ‘Should Look Inside His Heart’ To See If He Can Lead Effectively