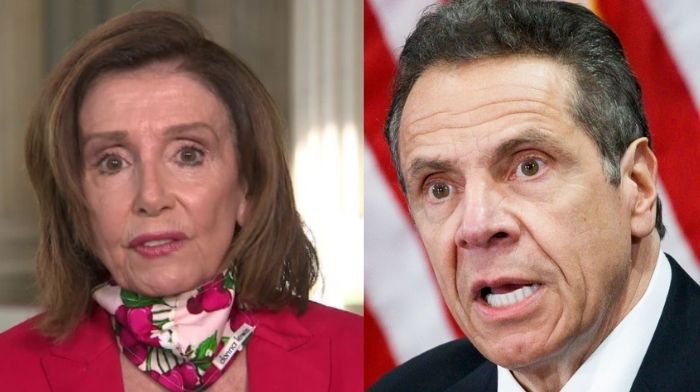 Though Speaker of the House Nancy Pelosi (D-CA) has previously said that she believes all women when it comes to sexual misconduct claims, she stopped short of saying that New York Governor Andrew Cuomo should resign when asked about the claims that have been made against him.

Instead, Pelosi called on him to “look inside his heart” to see if he can still govern effectively in the wake of this scandal.

Pelosi was asked directly by television anchor George Stephanopoulos if Cuomo should resign.

“I said there’s zero tolerance for sexual harassment, and we have taken measures in the House of Representatives, very strong measures in the House under the leadership of Congresswoman Jackie Speier of California,” she said in response, according to CNN. “What I said at the time that these revelations came forward, I said what these women have said must be treated with respect. They are credible and serious charges, and then I called for an investigation.”

“I have confidence in the attorney general of New York,” Pelosi added. “She has called for a, I think expeditious investigation, and again, with all the respect in the world for what these women have come forth and said.”

“In terms of  — you’re talking about New Yorkers now, in terms of generally speaking, people have to look inside themselves and say — Governor Cuomo also, how effective is their leadership in leading the state under the circumstances that are there?” Pelosi added. “But I do think that the women deserve to hear the results of these investigations as does the governor.”

“Can he be an effective leader now?” Stephanopoulos asked.

“No tolerance. No tolerance, and this is a subject very near and dear to my heart,” she replied. “There is no tolerance for sexual harassment. I’ll let the world know that.

“But you’re not calling on him to resign right now?” Stephanopoulos pressed on.

“I think we should see the results, but he may decide, and hopefully this result will be soon, and what I’m saying is the governor should look inside his heart,” Pelosi said. “He loves New York, to see if he can govern effectively. That could be one of the considerations he has.”

Read Next: AOC Turns On Cuomo – Says He ‘Must Resign’

This piece was written by James Samson on March 14, 2021. It originally appeared in LifeZette and is used by permission.