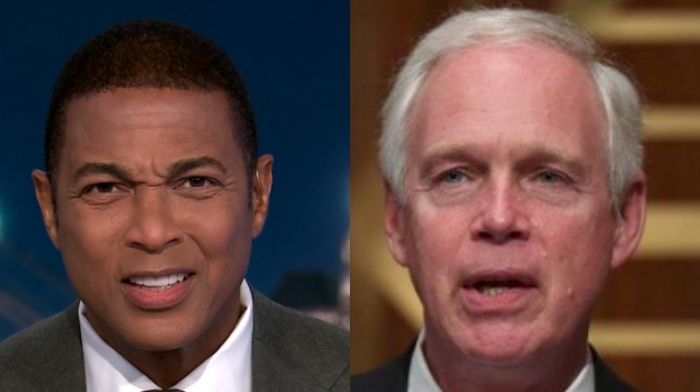 During his CNN show on Friday night, host Don Lemon attacked Senator Ron Johnson (R-WI), going so far as to accuse him of “spewing blatant racism” while discussing the Capitol riot.

“What they are fighting for is trying to disenfranchise voters,” Lemon said, according to Mediaite. “Mainly people of color who voted for Joe Biden. There are more than 250 bills nationwide to roll back voter access. And it’s nothing but a blatant attempt by Republicans to claw their way back to power, all on a big lie about an election that was stolen because the election was not stolen. If you can’t win fair and square, stop them from voting. That’s the strategy.”

“What they care about is taking away your vote and defending that big lie that i told you about, even now, even after everything we saw on January 6th when Trump-supporting extremists, racists, stormed the seat of our government, incited by the then-president,” he added.

“I want you to listen to this very, very closely, okay?” Lemon continued. “Put down whatever it is you’re drinking or whatever you’re doing and get everybody, gather in front of the TV set because here is Senator Ron Johnson in a radio interview, and he is spewing blatant racism, claiming he wasn’t afraid of the Capitol rioters, because, well, why don’t you take a listen for yourself.”

Related: CNN Host Don Lemon Says Republican Hypocrisy Is ‘Off The Charts’ On Tanden’s Mean Tweets Because Of Trump

Lemon then played a soundbite from “The Joe Pags Show” in which Johnson said:

“I’m also criticized because I made the comment that on January 6, I never felt threatened because I didn’t. And mainly because I knew even though those thousands of people, there were marching on the Capitol, were trying to pressure people like me to vote the way they wanted me to vote. I knew those are people that love this country, that truly respect law enforcement, would never do anything to break the law.

“Did you hear him?” Lemon said in response. “He wasn’t afraid of those people, maybe because they’re white? Not maybe. That’s the reason. Because if they were black, he would be afraid of them.”

This piece was written by James Samson on March 13, 2021. It originally appeared in LifeZette and is used by permission.

Adam Schiff Turns On Cuomo – Says He ‘Should Resign’