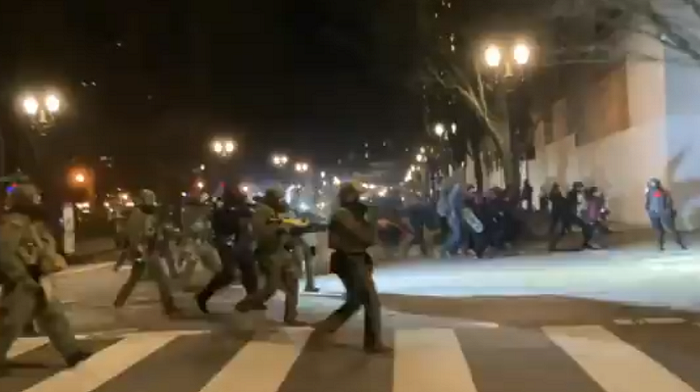 Federal law officers were dispersed in Portland, Oregon, Thursday night, as violent extremists set fires and smashed windows, in an attack at a federal courthouse.

“Dozens of demonstrators assembled near the courthouse Thursday night, and some of them broke glass at the federal building and lit fires,” OregonLive.com reported.

Accounts indicate protesters were repeatedly warned that they were trespassing on federal property.

Fox News notes that Portland “has seen almost daily and nightly protests for much of the past year.”

This particular attack on the courthouse, according to videos and journalists on the scene, was a result of protests over a pipeline, as well as the trial of a former Minneapolis police officer Derek Chauvin.

Protesters assembled in front of the downtown federal courthouse tonight. Old patterns emerge. This is the second push of federal officers clearing the park with flash bangs, less lethal munitions, and gas. pic.twitter.com/78l2w6LtrA

Attack On Federal Courthouse In Portland Is NOT An Insurrection

A couple of things to note here.

Nowhere in the mainstream media is the ongoing assault on a federal courthouse in Portland being described as an “insurrection.”

Merriam-Webster defines ‘insurrection’ as “an act or instance of revolting against civil authority or an established government.”

But that only applies to one side of the political aisle according to the media.

Well, the media and your new Attorney General, Merrick Garland.

According to Biden’s attorney general, launching a politically motivated attack against a federal courthouse does not count as “domestic terrorism” because they did it at night: https://t.co/IYFxVodJC9 https://t.co/3UEFRMHKB3

Missouri Senator Josh Hawley asked Garland during his confirmation hearing if “assaults on federal property” constituted domestic terrorism like that which was seen at the Capitol.

As the Washington Post writes, Garland responded that the Capitol riot in January is domestic terrorism, “while attacking a courthouse at night (as occurred in Portland) is not.”

It’s time to restore law and order in Portland. Federal officers should immediately arrest and detain all violent protestors and remove them from the streets for their felonious behavior. Throwing firebombs at federal courthouses is on par with 1/6/21. https://t.co/1swjzb0NWP

Leftists Have Allowed This Terrorism To Continue

Do you know what else you’re not hearing from the media? Federal law enforcement being disparaged as President Biden’s “stormtroopers.”

It was House Speaker Nancy Pelosi who referred to federal officers in Portland as “stormtroopers” and accused them of “kidnapping protesters and causing severe injuries in response to graffiti.”

That was in July when Donald Trump was still President, though.

These are not the actions of a democratic republic.@DHSgov’s actions in Portland undermine its mission.

Trump & his stormtroopers must be stopped.

This past September, Portland Mayor Ted Wheeler banned police from using tear gas against rioters in his own city.

Wheeler himself got hit with tear gas over the summer when he joined protesters in the streets and called for federal police officers to leave his city as rioters attacked a federal courthouse with explosives.

His words and actions contributed to the violence. He helped, by the media’s own definition, incite the riots.

Meanwhile, protesters down the street have started shooting fireworks at the federal courthouse. pic.twitter.com/XVmfVI1ty5

To recap, there is a violent insurrection that has been taking place for months in Portland, being defended by a group of law officers once known as stormtroopers, that is only happening during daylight hours.

And nobody in the media cares.