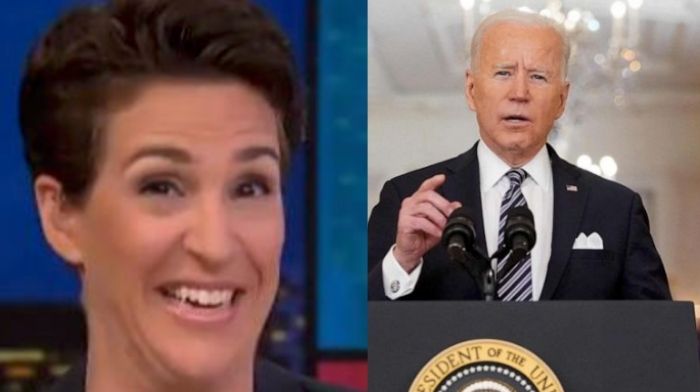 MSNBC host Rachel Maddow wasted no time in gushing over President Joe Biden’s coronavirus speech on Thursday night, and she also used it to get back to her favorite pastime of bashing Donald Trump.

‘I Think It Was Very Moving’

“I think it was very moving,” Maddow said of the speech. “The president is very good at articulating empathy, which has been said a million times, but these are the kinds of times when that becomes something that is incredibly utile for us as a country. When he said we’re coming through it, I don’t know if that was an ad-lib line or prepared line.”

“That was what I took away,” she added. “He’s not saying it’s all roses, we’re all done, it’s all better. I think it was important when he talked about that July 4th goal. He said, ‘You know what, this is just a goal.”

“We may need to reinstate restrictions if things go pear-shaped,” Maddow continued. “That was a moment of honesty rather than shine on a moment where he was telling us things are getting better.”

That’s when Maddow shifted to using this speech to attack former President Trump, something that she spent the past four years doing on a nightly basis.

“Whatever you think about President Trump, I think it’s fair to characterize his public pronouncements about COVID as being about himself, about things he did, how he was taking care of it,” added the MSNBC host. “He wanted you to believe that it was over because he was in charge, and obviously, he would be the one who would fix this.”

Maddow concluded by heaping more praise on Biden, ignoring the fact that he has yet to hold a press conference despite being in office for more than fifty days.

“He’s saying, I need your help,” Maddow said. “These are all the things we’re doing, but we all need to do it together. I need you to listen to Dr. Fauci. I need you to get vaccinated.:

“I need you to know how this is going to work and if things go badly, we are going to reinstate restrictions,” she concluded. “He’s asking for a whole of government and a whole of country response rather than talking about what he’s done.”