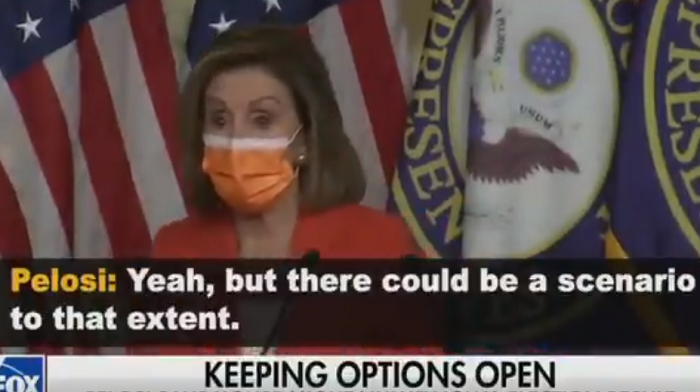 Asked by a reporter if she could envision a scenario where the House could overturn the state-certified election of a Republican Congresswoman, Nancy Pelosi replied, “Of course.”

Hart petitioned the results with Congress in December. Miller-Meeks filed a motion to dismiss shortly thereafter.

The House Administration Committee tabled that motion, setting up an opportunity to review the election.

Fox News reporter Chad Pergram asked Pelosi: “Could you see a scenario, depending on what they find in their probe, of unseating of the current member and seating Rita Hart?”

She added, “We’ll see where that takes us. There could be a scenario to that extent.”

* = for all the libs out there, I was anti-Stop the Steal, thought Jan. 6 was a terror attack, and said Trump cost the GOP the Georgia Senate seats. pic.twitter.com/jLU656itLE

Pelosi Trying to Overturn an Election

Pelosi advocating to overturn an election is odd coming from a member of a party whose messaging involved the idea that such actions are tantamount to treason.

Pergram followed up his questioning with a column in which he wrote, “The House hasn’t tinkered this much with overturning an election since 1985.”

He suggested such a move would be “a case study in the execution of the most raw, Machiavellian power politics possible … Even on Capitol Hill.”

Miller-Meeks was provisionally seated in Congress on January 3rd, but Hart claims her campaign identified 22 voters in the district who voted legally and whose ballots still were not counted.

“We are glad to see the House Committee on Administration taking the next step towards ensuring that every legally-cast vote is counted in this race and that all Iowans’ voices are heard,” a campaign spokesman for Hart said.

Again, similar statements by Republicans have been blasted by House Democrats as treachery.

Here’s a fact: Rep. @millermeeks won this election fair and square. The votes were counted and the election was certified. Now, Rita Hart is appealing to Pelosi, not the Iowa process, to overturn the will of #IA02.

Critics fired back at Pelosi’s comments and the House Democrats’ actions in trying to overturn the Iowa congressional election.

National Republican Congressional Committee spokesman Mike Berg said in a statement: “Rita Hart and Speaker Pelosi are trying to subvert Democracy and I look forward to all Democrat members condemning this partisan stunt.”

Unless Hart takes on a nice orange glow and changes her last name to one that rhymes with Gump, don’t hold your breath.

In Iowa, the votes were counted, recounted, and in some cases – recounted again.

Now, Rita Hart is asking democrat politicians in DC to elect her because the voters of Iowa did not.

Help us stop this attack on Iowa’s free and fair elections! #IA02 https://t.co/MhNTaR5cJ5

Rep. Rodney Davis (R-IL) added, “Our committee should not be moving forward with overturning our colleague’s state-certified election.”

“She is a sitting member of Congress with all of the same rights as each and every one of us,” Davis said.

When are Republicans going to learn that ‘rights’ are only afforded to Democrats when it comes to election results?

The Administration Committee will review Hart’s petition, though they have yet to provide a timeline upon which such a review will take place.