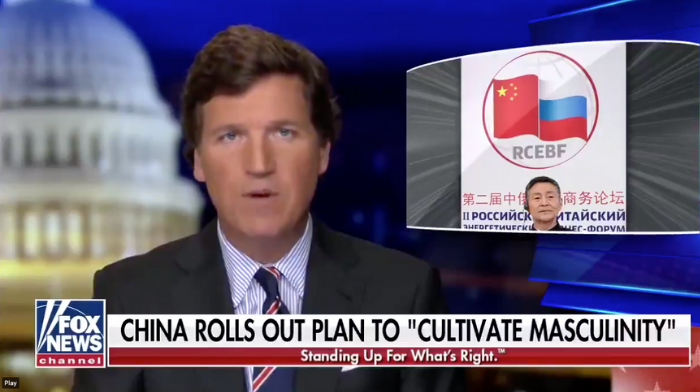 On Thursday, Fox News host Tucker Carlson was sharply criticized by the Pentagon for his comments about pregnant soldiers and warning that the military worries too much about gender and diversity while China’s global and military power continues to rise.

The official website of the Department of Defense posted an article titled, “Press Secretary Smites Fox Host That Dissed Diversity in U.S. Military.”

The article is very pointed, and quotes Department of Defense Press Secretary John Kirby accusing Carlson of using “his show to denigrate the contributions of women in the military and to say the Chinese military is catching up to the U.S. military because it does not allow women to serve in the percentage the United States does.”

Among other comments, Carlson said that China is trying to encourage masculinity in their country, and they are worried that Chinese boys are being “spoiled by housewives and female teachers.”

Tucker Carlson Segment From A Few Nights Back That The Left Is Whining About Today: Joe Biden Is Making A Mockery Of The United States Military

Tucker Discusses How China Is Focusing On Cultivating Masculinity In Their Military While The U.S. Military Embraces Woke Politics. pic.twitter.com/Pi9O6C7tOF

Carlson: ‘Pregnant Women Are Going To Fight Our Wars… It’s A Mockery’

The Fox News host contrasted this with a U.S. military that he said is too preoccupied with “new hairstyles and maternity flight suits.”

The AP reported that “Female soldiers can let their hair down, and flash a little nail color under new rules being approved by the Army. But male soldiers will still have to shave.”

The changes were the Army addressing “longstanding complaints, particularly from women.”

“Pregnant women are going to fight our wars,” Carlson said. “It’s a mockery of the U.S. military.”

Last August, the Air Force reported that they were working on “new female maternity flight suits.”

“The bottom line is, it’s out of control, and the Pentagon’s going along with this,” Carlson added.

He added, “A major and specific contributor to that advantage are the women who serve, civilian and military alike.”

“I would hope that in the reaction he’s seeing, and hopefully in our reaction here today, that he’ll realize the mistake he made and express some regret about the manner in which he’s demeaned the entire U.S. military and how we defend and how we serve this country,” Kirby noted.

“To be sure, we still have a lot of work to do to make our military more inclusive, more respectful of everyone, especially women,” Kirby said.

Senior military leaders have condemned viral comments made by Tucker Carlson about women in uniform. Pentagon John Kirby said on Thursday that Defense Secretary Lloyd Austin shares the “revulsion” many senior leaders have expressed about the monologue. https://t.co/v5sQ2fHfzF

Kirby: ‘What We Absolutely Won’t Do Is Take Personnel Advice From A Talk Show Host’

“There is a lack of women at senior ranks,” Kirby said. “We pledge to do better, and we will,” he said.

“What we absolutely won’t do is take personnel advice from a talk show host or the Chinese military. Maybe those folks feel like they have something to prove — that’s on them,” Kirby said.

He added, “We know we’re the greatest military in the world today and even for all the things we need to improve, we know exactly why that’s so.”