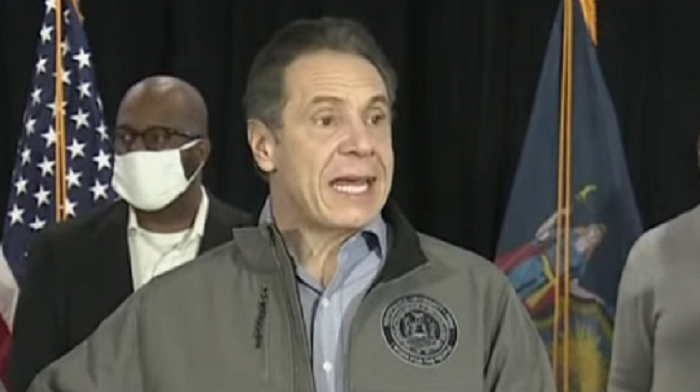 The New York State Assembly has taken its first step in pursuing the possible impeachment of Governor Andrew Cuomo, as calls continue to mount for his resignation.

Assembly Speaker Carl Heastie on Thursday gave the chamber a green light to open a probe which would include full subpoena power.

“The Democratic Conference is taking the first step toward impeachment by opening an investigation with full subpoena power to obtain facts and testimonies under oath,” he said in a statement.

Kim, who has accused Cuomo of trying to help cover-up his ongoing nursing home scandal, vowing to destroy his career if he didn’t go along, said he felt the impeachment process could have begun immediately.

“Some members, including myself, argued that we had enough admission to proceed with impeachment today but the conference is leaning toward setting up the process and structure toward impeachment,” he said.

They are terming it as an “impeachment investigation.” pic.twitter.com/ZfJmP693Lh

Assembly Sets Forth on Path to Cuomo Impeachment

The Assembly’s actions in moving to possibly impeach Cuomo come as a sixth woman has come forward with sexual misconduct allegations.

The latest claim involves a female aide whose description of events – through a source with direct knowledge – could land in the category of assault.

The Albany Times Union reports that Cuomo “aggressively groped” the woman “in a sexually charged manner” after summoning her to the Executive Chamber.

The incident allegedly involved the Democrat “reach(ing) under her blouse” and fondling her.

“The reports of accusations concerning the governor are serious,” Heastie said in a statement adding, “the committee will have the authority to interview witnesses, subpoena documents and evaluate evidence, as is allowed by the New York State Constitution.”

Cuomo, aside from the impeachment probe, is currently being investigated on multiple fronts by Democrat New York Attorney General Letitia James.

One involves a cover-up in which the administration is accused of hiding data on deaths of the elderly in nursing homes which may have been the result of the governor’s March executive order forcing the facilities to take on COVID-positive patients.

The second is an independent investigation into the numerous sexual harassment claims.

The impeachment probe is not expected to interfere with James’ investigations.

For the record and just so you know…. it took SIX allegations against Cuomo, one of them a disgusting groping allegation, and 15,000 dead seniors to get the worthless and complicit Assembly Democrats to even⁦ begin to investigate.
VOTE THEM OUT https://t.co/xxWLoCLhPv

Albany police also revealed Thursday they received a report from the New York State Executive Chamber about an incident with potential criminal activity.

The incident, which aligns with the new accuser’s groping allegations, involved a female aide and took place at Cuomo’s executive mansion.

The New York Times reports that the police department has not opened an official investigation, but is offering its services to the alleged victim.

Police say they have not opened an investigation, but what allegedly happened may rise to the level of a crime.@Jerickaduncan has the latest pic.twitter.com/8jy9Zlr64E

The latest allegations have not only started the ball rolling on Governor Cuomo’s impeachment, but it has also prompted dozens of Democrat lawmakers to call on his resignation.

#BREAKING: I join almost 60 state legislators, including Senators and Assemblymembers who believe it’s time to restore the public’s trust in our leadership.

This is what’s best of our state. Governor Cuomo, resign now. pic.twitter.com/TVXMbLy794

“It is disgusting to me. And he can no longer serve as governor. It’s as simple as that,” he said.

Earlier this week, the New York governor practically dared lawmakers to impeach him.

“Cuomo told [Senate Majority Leader Andrea] Stewart-Cousins he wouldn’t quit and they would have to impeach him if they wanted him out of office,” the Associated Press reported.