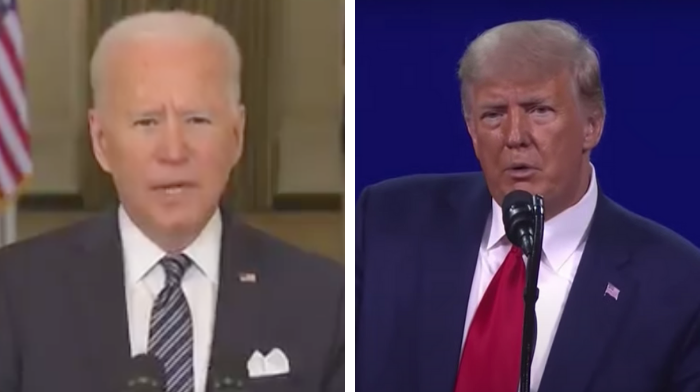 On Thursday, in President Joe Biden’s first national address since Inauguration Day, he falsely claimed that former President Trump met the COVID pandemic with “silence” and that it “spread unchecked.”

Yet, some actions that Trump took at the onset of the pandemic were efforts Biden later agreed with and presumably would have done himself.

“A year ago we were hit with a virus that was met with silence, and spread unchecked. Denials for days, weeks, then months. That led to more deaths” — Biden begins his big coronavirus speech by taking shots at Trump pic.twitter.com/gljYpCMLv5

“A year ago, we were hit with a virus, that was met with silence,” Biden said. “It spread unchecked.”

Are these things true?

The Project On Government Oversight has an extremely detailed timeline of events.

As early as January 6th, the US offered to send a CDC team to China.

The very next day, the CDC created “a Center-led Incident Management Structure” to address the new outbreak and “to optimize domestic and international coordination if additional public health actions are required.”

On January 20, in-bound health screening began at some US international airports.

By March 11, 2020, President Trump had taken a number of important actions to address COVID-19. Actions that Biden would later agree with.

There are many, many detailed entries like this at POGO, making Biden’s claim that the pandemic was “met with silence” demonstrably false.

Trump was wrong about how long the pandemic might last, originally believing it could be over rather soon, and did downplay some to avoid public panic, which he later admitted.

These are outright lies from Biden.

President Trump restricted travel from China in January 2020, followed closely by restrictions on travel from Europe.

Biden called the China travel ban “xenophobic” and “fear-mongering” at the time.

Some of Trump’s actions Biden even agreed with.

The media claims Biden agreed with this policy. FactCheck.org notes:

Democrats did little to work with the president on this front. House Speaker Nancy Pelosi even called it the “Trump virus.”

When Trump’s Operation Warp Speed was first launched, Biden, Democrats, and many experts were skeptical. Biden later praised it.

National Institutes of Health Director Francis Collins told “Axios on HBO” last month that the fact that it “got done in 11 months from when we first knew about this virus is at least five years faster than it’s ever been done before,” Collins said.

“The Operation Warp Speed, for which I give a great deal of credit to [former HHS Secretary Alex Azar], was a effort that many of us were not initially convinced was going to be necessary,” Collins said. And it was thought about as a Manhattan Project.”

During the last presidential debate, Biden said that there was “no prospect that there’s going to be a vaccine available for the majority of the American people before the middle of next year.”

Democratic nominee Joe Biden: “There’s no prospect that there’s going to be a vaccine available for the majority of the American people before the middle of next year.”#Debates2020 #debate #DebateTonight #debates #PresidentialDebate2020 #COVID19 #Trump #Biden pic.twitter.com/H2TNYU0SKb