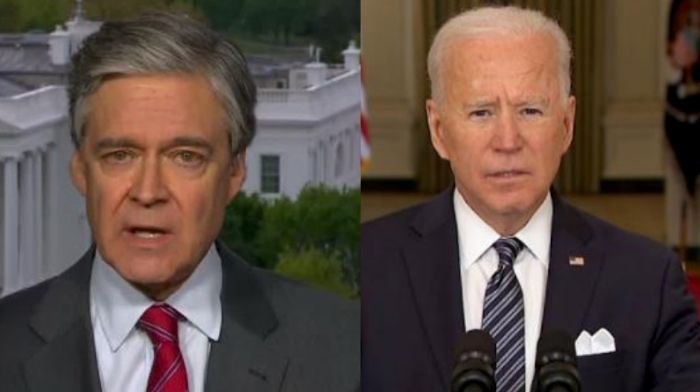 CNN’s White House correspondent John Harwood went on “New Day” on Friday morning to gush over President Joe Biden’s speech on COVID-19 that he gave the night before, claiming that he conveyed empathy which “all Americans have been missing” in a leader.

“I think a spiking the football is the last thing that President Biden wanted to do,” Harwood said. “What was notable about the speech was the appeal to universal values.”

“It was striking in the way that the president conveys empathy in unadorned language, trying to appeal to the common experiences that all Americans have been missing during this pandemic,” he added. “Appealing to them for assistance.”

“We have had four years of a president who recently departed who was saying to the American people, you need me. Joe Biden was saying I need you,” he continued. “He was also saying I need science.”

“I need the business community to continue ramping up these vaccines,” Harwood said. “I need state and local governments to push these vaccines out, and I’m backing them up with a rushing river of money from the American Rescue Plan.”

“And most of all, I need Americans to mask up and do the things, the public health guidelines that will enable us to achieve those goals by the Fourth of July,” said the CNN reporter.

“This is a president who has consistently underpromised and over-delivered,” he concluded. “You can bet that they’re confident that they can achieve these goals if they can keep the American people on task.”

Harwood was far from the only member of the mainstream media who loved Biden’s speech, as MSNBC host Rachel Maddow heaped praise on him as well.

“I think it was very moving,” Maddow said of the speech.

“The president is very good at articulating empathy, which has been said a million times, but these are the kinds of times when that becomes something that is incredibly utile for us as a country,” she continued. “When he said we’re coming through it, I don’t know if that was an ad-lib line or prepared line.”

“That was what I took away,” she added. “He’s not saying it’s all roses, we’re all done, it’s all better. I think it was important when he talked about that July 4th goal.”

“He said, ‘You know what, this is just a goal. We may need to reinstate restrictions if things go pear-shaped,’” Maddow concluded. “That was a moment of honesty rather than shine on a moment where he was telling us things are getting better.”

AOC Turns On Cuomo – Says He ‘Must Resign’