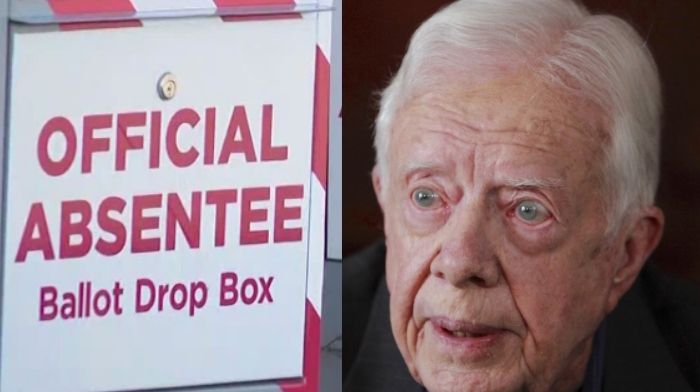 Former President Jimmy Carter spoke out this week to condemn efforts by Georgia Republicans to restrict absentee voting and introduce other election reforms after the controversial 2020 election.

They are now considering measures that include strengthening voter ID requirements for absentee voters, limiting the number of available ballot drop boxes and requiring those drop boxes to be inside early voting locations, banning nonprofits from funding elections, and more.

Democrats are against these measures, claiming that Republicans are using false claims about election fraud to pass legislation that will make it harder for minorities to vote.

Carter, a Democrat who was president from 1977-1981, released a blistering statement in which he spoke out against what Republicans are doing.

“While states must safeguard the integrity of the election process to prevent fraud, this should not be at the expense of voters’ access to the polls,” said Carter, 96.

“Now, as our state legislators seek to turn back the clock through legislation that will restrict access to voting for many Georgians, I am disheartened, saddened, and angry,” he added.

Related: Trump Is The Best President In American History! Here’s The Proof

Not stopping there, Carter blasted arguments made by Republicans that “selectively referenced a report prepared by a 2005 commission that I co-chaired with former Secretary of State James Baker.”

The report in question looked into mail-in voting practices and recommended that more studies be done before voting by mail was adopted across the country.

“In the 16 years since the report’s release, vote-by-mail practices have progressed significantly as new technologies have been developed,” Carter said. “In light of these advances, I believe that voting by mail can be conducted in a manner that ensures election integrity.”

“This is just one of several ways to expand access to the voting process for voters across the state, regardless of political affiliation,” he concluded. “We must not promote confidence among one segment of the electorate by restricting the participation of others.”