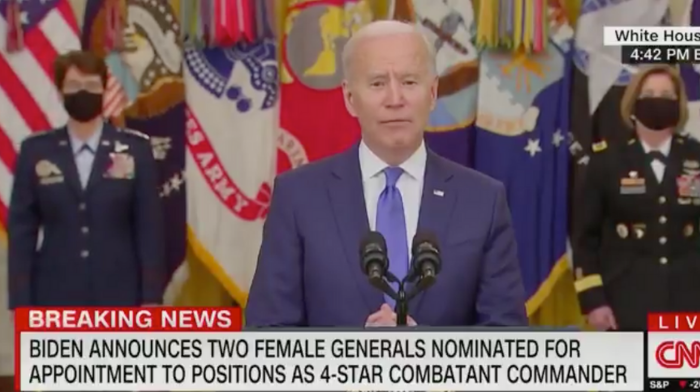 During a speech on Monday, President Joe Biden seemed to have an issue remembering the name of his Secretary of Defense Lloyd Austin while referring to him several times.

Then it seemed he could not remember the name of his own defense secretary.

“It’s my great honor to serve as your commander-in-chief,” Biden began.

“I look forward to hearing your active duty and recommendations of how we will work together to keep the American people safe, meet every challenge in the 21st century,” Biden said to the nominees. “I want to thank you both.”

That is when he appeared to forget the Defense Secretary’s name, and referred to the Pentagon as “that outfit.”

“And I want to thank the sec — the, the, ah former general. I keep calling him general, but my, my — the guy who runs that outfit over there,” Biden said.

He continued, “I want to make sure we thank the secretary for all he’s done to try to implement what we’ve just talked about and for recommending these two women for promotion.”

“Thank you all. May God bless you all and may God protect our troops,” Biden finished.

Austin was confirmed by the Senate in January and is the first black man to serve as Defense Secretary.

Austin has a long military history, including Commander of the United States Central Command under President Obama. More recently, he was on the board of military contractor Raytheon.

Biden came to Houston. He forgot to thank our Republican governor for meeting with him but he did thank “Shirley Jackson Lee” and then forgot where he was. pic.twitter.com/FUDeEB06YD

RELATED: Biden Mispronounces Democrats’ Names During Speech, Asks ‘What Am I Doing Here?’

“What am I doing here?” Biden said looking at his podium.

Some in the mainstream media have attributed Biden’s speaking mistakes as stemming from a childhood stutter.

Other outlets have running lists of Biden’s gaffes.

Who Gets Stimulus Checks — and When? What to Know on COVID-Bill Payments