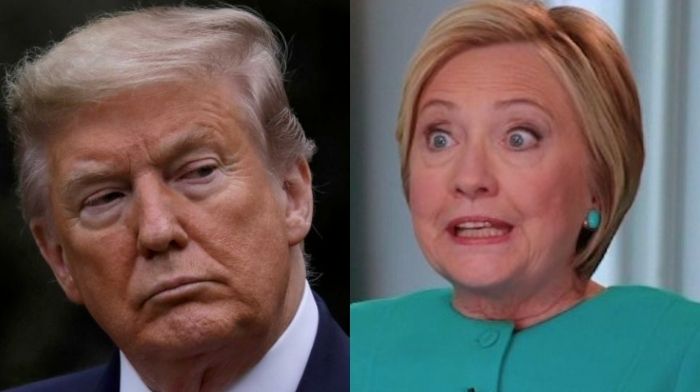 The former Secretary of State made her comments during an interview on “Washington Post Live” with host Jonathan Capehart.

Hillary Clinton: “It is really troubling to see the Republican Party turn themselves into a cult” and “pledge allegiance” to Trump. pic.twitter.com/uzyg1rkkxm

RELATED: Joe Manchin Wavering On Filibuster: Open To Making It More ‘Painful’ For The Minority Party To Use

Capehart said to Clinton, “The Republicans have been eating their own. I wonder what advice, if any, you would give to Congresswoman Liz Cheney of Wyoming in handling, not just Donald Trump and the criticisms coming from him but his followers in Congress?”

Clinton replied, “Well first, I will say I don’t want to hurt Liz Cheney, but I was incredibly impressed by her strength in standing up to what had been instigated by Donald Trump, an attack on our Capitol by the then-sitting president of our country, which was so outrageous.”

😂😂👏🏽 HRC says she “… doesn’t want to hurt Liz Cheney” , but she was impressed by her regarding her vote for the impeachment.

“Really, Representative Cheney was one of the very few Republicans in Congress who did stand up,” Clinton continued. “And I give all of them who spoke up, who voted for impeachment, who voted for conviction in the Senate credit for doing what was right.”

The former first lady condemned Republicans who did not join Cheney in voting to impeach Trump.

Clinton said, “I just wish that more Republicans had had either the courage or the understanding of what they needed to do, that they too had stood up and spoken out.”

Republican voters are not in agreement. GOP Congressmen who voted to impeach or convict President Trump have been censured at home, and many are already facing primary challengers.

Then she questioned whether Republicans were loyal to America or Donald Trump.

“Right now, Jonathan, it is really troubling to see the Republican Party turn themselves into a cult and, you know, basically pledge allegiance not to the United States of America but to Donald Trump,” Clinton charged.

The insult is constructed in a curious way, given that Trump’s supporters describe their support as ‘America First,’ and often charge that politicians like Hillary Clinton have put America last.

Hillary Clinton: “It is really troubling to see the Republican Party turn themselves into a cult and basically pledge allegiance, not to the United States of America, but to Donald Trump.” pic.twitter.com/NtHLmminsH

RELATED: Yet Another Major Republican Senator Announces That He Won’t Be Running For Reelection In 2022

Clinton then gave the GOP an additional wag of the finger.

“Something I do not understand, I cannot accept, and I don’t think the majority of Americans — as we have seen with the very large popular victory of Joe Biden and Kamala Harris, the passage of the American Rescue Plan, which is so popular — I don’t understand why the Republican Party is so afraid of itself, because that’s what it comes down to,” she finished.