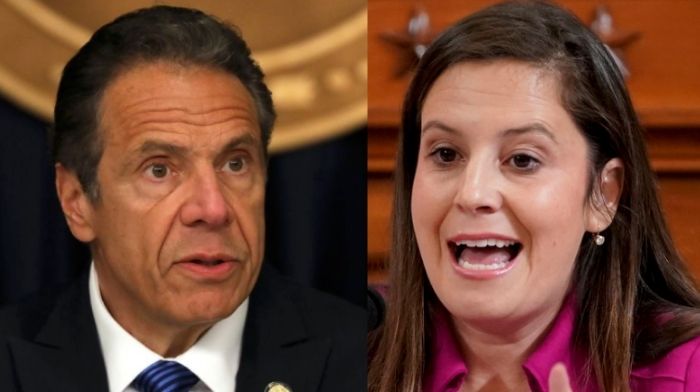 Rep. Elise Stefanik (R-NY) spoke out on Monday to blast Andrew Cuomo as the “worst governor in America” as calls continue to grow for him to step down.

Earlier on Monday, Republicans in the New York State Assembly launched an impeachment resolution against Cuomo, saying that he has lost “credibility and trust” and has an “inability to lead” the state after multiple aides accused him of sexual misconduct and his handling of the COVID-19 pandemic was called into question.

In an interview with Fox News, Stefanik stood by dubbing him the “worst governor in America.”

“Well, he has earned that title,” she said. “Governor Cuomo has been enveloped by multiple scandals. First, you have the nursing home scandal and the cover-up, which I believe is a criminal. It’s a crime, a federal crime and an obstruction of justice.”

“You have his most senior aide admit to withholding information from the Department of Justice when they requested information on the numbers of deaths,” Stefanik continued. “And we now know that it’s over 15,000 vulnerable seniors who died because of Governor Cuomo’s nursing home edict forcing positive covid patients into nursing homes.”

“You also have these sexual harassment scandals, not one, not two, but five women have come forward and have shared their personal, horrific experiences of sexual abuse, sexual harassment and sexual grooming,” Stefanik added.

“It’s not just Republicans who are speaking out for his resignation,” she said.  “It’s Democrats as well. And if they really want to take action on behalf of everyday New Yorkers, they need to join Republicans to start impeachment proceedings.”

Not stopping there, Stefanik pointed out that she has been pushing for Cuomo to be investigated for months.

“This is about the governor preying on vulnerable, much less powerful individuals, oftentimes very young, in their 20s, alone in his office on state government property,” she continued.

“We should take these women’s personal experiences very seriously and I call for his resignation,” Stefanik concluded. “If you look at the governor’s own statement. He has called for fellow elected officials for much less to immediately resign. He’s not following his own words.”

At the time of this writing, Cuomo has still refused to step down, despite bipartisan calls for him to do so.

So Much for the Biden ‘Return to Normalcy’